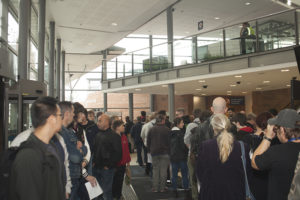 Gold Media and Events, the organiser of The UK Drum Show, has revealed entrance figures for the inaugural show, held last weekend in Manchester.
Attendance figures for the two day event numbered 2,399 visitors, Gold Media says, an attendance level which has seen several leading drum and percussion companies immediately rebooking for next year’s event – the dates of which have yet to be announced.

‘As this was year one, we had to over-deliver to persuade visitors to attend and so we had to bring in the big guns, which I think everyone agreed we did, offering a really stellar line-up of artists. That made it a success with visitors as the very positive ticket sales and many comments on social media have proved. That was just half the equation, of course, because we also had to satisfy the exhibitors that not only was the public coming but that the show itself was professionally run and that the venue was an improvement on some of the others that have been the source of so many complaints over the years. I’m delighted to say we proved that, too.
‘Several exhibitors have been kind enough to get in touch already, to confirm their positive experience of the event and to inform us that they are joining us next year. Among the first to have contacted us is D’Addario UK, representing top quality brands including Meinl Cymbals, Promark drum sticks and Evans heads. Also confirming have been Zoom UK, Highwood Drums, Drumazon, Guru Drums, Amedia Cymbals, all saying they wish to join us for next year’s show.
Exhibitor Reactions:
‘I was very happy with the overall response from visitors to the show, it has allowed me to gauge the awareness of Zoom within the drum community and be able to give good feedback to Zoom Japan.’ ZOOM UK

‘Thank you for a well-organized show! It was great being there. I think we made good and sold better than we have done at LDS. I am very satisfied!’ WACCO DRUMS

‘For me this show had many bonuses over many previous shows, the load in was a dream etc. The venue on a whole is perfect, I have attended drum shows & exhibited at them for the last 12 years so I know the venues of London drum show, drummer live, music live… this is by farther nicest, the acoustics in the exhibition hall alone are fantastic, when someone hits a snare you don’t hear that snare 4 times over as the sound clatters around the place…. it made volumes more tolerable for longer’. HIGHWOOD DRUMS

We really enjoyed the vibe of this show which we know delivered a high quality experience for visitors. We met lots of new customers which has already increased our social media presence. The show was an excellent platform for us to launch Masshoff and HHG in the UK and reintroduce Noble & Cooley. In addition the high calibre of artists visiting our stand helped to raise the profile of both the store and our brands. DRUMAZON

‘Dates for The UK Drum Show 2018 will be announced shortly and work has already begun organising another stunning line-up for next year, along with working with exhibitors to ensure a richer experience with regards to driving sales revenues through the till,’ Golding says.’ ‘We will be announcing confirmed exhibitors and dates shortly, as we would like to be transparent from the off with consumer visitors about which brands are exhibiting – something that  hasn’t always been the case elsewhere’.

For further information or to book your booth for 2018, please contact organiser Neil Golding 01271 861 571
Info: www.theukdrumshow.com