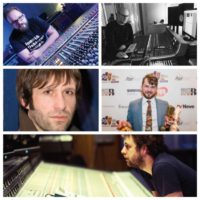 ‘They do amazing work’: MPG Awards Breakthrough Producer winners on how the MPG supports new talent

‘The MPG has created a community and network for the UK recording industry, which is hugely important.’

Since launching 10 years ago, the Music Producers’ Guild (MPG) has been been laying the foundations for the brightest up and coming audio engineers and producers to build their careers on. Ahead of the upcoming 2018 MPG Awards, which take place at London’s Grosvenor House Hotel on March 1, 2018, we caught up with some of the previous winners of its annual Best Newcomer and Breakthrough Producer awards to ask them how the MPG supports young talent.

Paul Savage, Breakthrough Producer of the Year 2010, tells PSNEurope: “It’s crucial to show young people trying to make it in the industry that there are people who have followed similar paths. It’s a tough industry. I’ve found the Speakeasy nights that I’ve been to in Glasgow have been packed with young engineers/producers talking to more experienced professionals in a relaxed atmosphere.”

Eliot James won the Breakthrough Producer award the following year, in 2011. He comments: “The MPG plays a very important role in supporting young talent, particularly with its breakthrough award categories. But aside from that, the MPG has created a community and network for the UK recording industry, which is hugely important, especially for up and coming talent, and even more so now that there are fewer and fewer large recording studios, which perhaps used to offer a kind of social hub for engineers and producers. There’s nothing more reassuring and encouraging than going out and finding kindred souls in the same boat and the MPG is all about that, so hats off to them.”

“The great thing about the MPG Breakthrough Awards is that they’re not defined by age,” says Andrew Hunt, Breakthrough Producer winner in 2017. “It’s to do with recognising a significant step up in work, regardless of age, or how long you’ve been in the industry – I think the MPG does amazing work.”

Charlie Andrew, Breakthrough Producer of the Year 2013, thinks it’s ‘a fantastic resource for producers at any stage of their career’. He continues: “ In terms of the awards, it’s a great leg up, but beyond that they not only run loads of great networking nights, but they do panels and workshops all over the country to help new producers learn and grow. The lobbying they do on our behalf is also essential. It’s something I’ve had a little involvement with and would love to be further involved; as our industry evolves it’s important for producers to be able to speak with one voice and have someone representing what we do.