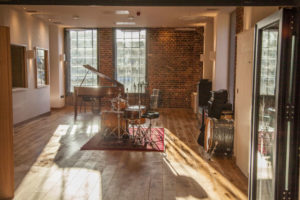 Adele engineer praises the ‘genuinely brilliant’ facility at the college

Adele engineer Liam Nolan was brought in to mix a track by ACM students – the first live recording performed in the studio.

The large live room can hold a full orchestra, and shares similar technical and aesthetic designs to Metropolis. ACM executive chairman Kainne Clements runs both ACM and Metropolis and wanted to “mirror the quality of the London studio for ACM students to use at the Guildford campus”.

Nolan said: “I’d be pretty happy working out of these rooms, it is genuinely brilliant.”

The new studio, which features an SSL Duality desk, will be used by ACM’s tutors for lectures, workshops and masterclasses, such as its annual Audio Production Event (APE).

When the studio isn’t in use by timetabled events, all ACM Guildford students will be given the opportunity to book the space.

Read the full feature and see more photos of the new facility in the March issue of PSNEurope.