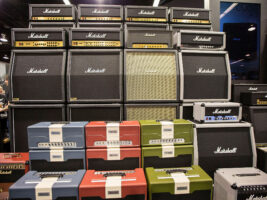 A brief history of Marshall amps

Marshall Amplification is one of the most popular, successful and storied brands of all time. Its products have been used by everyone from the most prominent guitar players in history to weekend warriors and budding bedroom shredders.

READ MORE: “I hadn’t played loud for a while!”: Scott McKeon on recording a wall of amps and finally playing with a band again

The company’s most quintessential amps make use of valve technology but, these days, Marshall offers many modern options too, such as solid-state, hybrid and even modelling amps. With a history as rich as its tones, the roots of Marshall simply beg to be explored. Here’s a brief history of the brand.
The beginnings of a legend
Company namesake Jim Marshall had been playing music on the road for more than two decades when he opened Jim Marshall and Son, a music shop in London. The store’s broad product selection appealed to many guitarists who would go on to be massively successful, including Ritchie Blackmore and Pete Townshend. The shop became quite the hip spot for young musicians getting into the burgeoning rock genre, and soon became one of the area’s premier sellers of guitar amplifiers.
After hearing several guitarists say that they couldn’t get the sound in their head to come through their speakers, Jim decided to build his own. Jim worked with his son Terry, with whom he co-owned the shop, as well as service engineer Ken Bran. Together, they tinkered with circuits and components to create something the world had never heard before. What’s more is that none of them were guitarists: Jim had been a touring drummer, while Terry was a saxophone player.
Marshall Bluesbreaker
The JTM45 is born
Named Number One, the first Marshall amp received 23 orders on its first day of sale, in the autumn of 1962. It would later be renamed the JTM45. From the beginning, Marshall rated its amps by RMS (which is where the 45 comes in) where other manufacturers rated their designs in terms of peak power. Word spread and success grew. So much so that it didn’t take long for the company to open another location. Demand soon outstripped supply and, in the middle of ’64, Marshall’s the first factory went live.
It was around this time that Who guitarist Pete Townshend requested more power from Jim Marshall, which led to one of the brand’s most interesting products: the 8×12-inch speaker cabinet. This cab soon became the two 4×12” stack so identifiable across stages and studios the world over.
Marshall DSL
The international stage
A former student of Jim, Mitch Mitchell had been playing with a mesmerising American guitarist whose name you’re probably familiar with. At a show in 1966, the venue refused to remove the Marshall backline amp to make room for the one the guitarist had brought with him. But, after playing through it, he was floored. He asked to meet the maker – a pivotal moment in Marshall amps achieving international recognition. That guitarist? Jimi Marshall Hendrix.
This newfound acclaim for the brand meant that yet again it had to upgrade its manufacturing site, this time to Bletchley in the UK, where it’s still headquartered today.
Marshall JVM
Marshall Amps by decade
Across the years, different amp models released by Marshall helped tell the musical tales of the times.
1960s
Bluesbreaker
The Bluesbreaker helped define the sound of 1960s blues-rock, especially from across the pond. Famously used by Eric Clapton, its name came from his time in John Mayall’s Bluesbreakers. It’s also one of the most sought-after amps by collectors on the vintage market today, with some fetching upwards of $10,000.

Marshall also released a guitar pedal based on the Bluesbreaker sound. It was also a hit, and is considered one of the best Marshall-in-a-box units.
Plexi
Marshall Plexi
Many of the most beloved rock guitar sounds come down to this timeless invention. The Plexi got its name due to its plexiglass front panel. The Marshall Plexi is one of the brand’s most popular products.
1970s and 1980s
JMP
Marshall JMP
By the time the JMP came around, there had been further changes to Marshall’s manufacturing practices. These models now offered a master volume in order to bring it to more reasonable levels. Marshall changed how the signal flowed within the amps to keep the characteristic crunch that formed the basis of so many guitarists’ sound. Players soon found that cranking the new master volume could provide even more saturation. JMPs found favor with popular guitarists such as Slash, Zakk Wylde, and the late great Randy Rhoads.
JCM800
Marshall JCM800
One of Marshall’s most popular models, the JCM800 was launched in the early 1980s. This one was a much different style, designed to produce more overdrive directly into distortion. It just so happened that many rock genres were at this point in time adopting a heavier sound, and this amp was the perfect option for shred-heavy players of the decade’s hair-band era. It was also cheaper than past Marshall amps, which meant up-and-coming artists were better able to afford it.
Silver Jubilee
Marshall Silver Jubilee
As Marshall celebrated 25 years in the market, it released the Silver Jubilee in 1987. The amp’s aesthetic was indicative of the 25th anniversary, with a classic, silver look. Another budding guitar hero fell in love with this model. After using a few different Marshalls, Slash found his true live sound in this model and still uses them onstage today, even if on recordings he typically uses a JMP or JCM800. The Silver Jubilee amps are still renowned today, and Marshall has reissued them in a few different formats over the years, including smaller combos and lower-wattage models.
1990s
The 1990s saw the release of the DSL and JVM lines, which, while not as legendary as Marshall’s earlier models, continued to make use of vacuum tubes. These lines offered multiple channels and features that were a culmination of everything that had come before them. While these models haven’t stood the test of time quite like the Plexi and JCM800, for example, they still offer all the crunch that players have always found so appealing.
Conclusion
From the very beginning, Marshall was destined for success. The brand turned out legendary products from the get-go, which found their home across multiple genres. Jim Marshall passed away in 2012 but his legacy lives on. Today, Marshall is more popular than ever. Long live the Father of Loud.
For more features, click here.
The post A brief history of Marshall amps appeared first on Guitar.com | All Things Guitar.