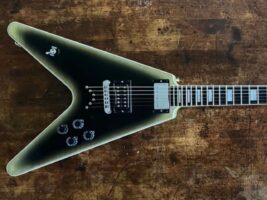 Adam Jones has taken to social media to detail what he considers to be one of his “top favourite guitars” of all time, a custom relic’d Gibson Flying V in reverse Silverburst.

Shared on his Instagram earlier today (Monday 19), Tool guitarist Adam Jones has revealed some close-up shots of his new favourite axe. A custom Gibson Flying V prototype in the reverse version of his signature colourway, the Silverburst, the musician reveals it is one of only three ever made.
“A Stellar Custom Vintage Aged REVERSE Silverburst @gibsonguitar Flying V with a beautiful Murphy Lab finish,” Jones explains in the post. “My dream guitar made true by my good friend @gueikian THANK YOU AMIGO [and] a very rewarding collaboration.”
Elaborating on how he owns two of the three prototypes, Jones goes on to confirm that this is what he was using on stage during his most recent tour with Tool and explains that Gibson brand president Cesar Gueikian owns the remaining model.
The specifications of the model are shown, albeit very rapidly, in the post and the guitarist continues to describe some of the specific features of the design in the remainder of his caption:
“I always loved the 1958 Futura headstock & ask if Gibson team would be willing to pull it out of retirement,” he writes, explaining the story behind the design. “I believe it’s one of the heaviest Flying V’s Gibson has ever made to date. The overall tone – lows/mids/highs are amazing and the heavy body weight also helps me control feedback and sustain just like my vintage LPCs.”
An ultra-rare model designed for the man himself by Gibson, the Tool virtuoso also goes on to explain that many of the biggest names in metal helped contribute to the prototype. Metallica’s Kirk Hammett, Judas Priest’s Richie Faulkner and Slipknot’s James Root are just some of the names listed by Jones as helping and supporting the production of the guitar – with the latter two also commenting on the original post.
See the full post on Adam Jones’ Instagram.
The post Adam Jones says this new custom Gibson Flying V is his “dream guitar made true” appeared first on Guitar.com | All Things Guitar.