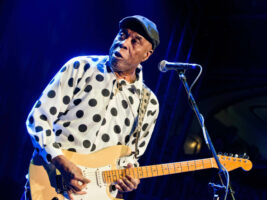 Blues legend Buddy Guy breaks out his signature wah pedal in the latest single from his forthcoming album The Blues Don’t Lie.

Titled I Let My Guitar Do The Talking, the funky track will form part of the 86-year-old musician’s 34th studio album, The Blues Don’t Lie, which is set to arrive later this month.
Produced by longtime collaborator Tom Hambridge, the follow-up to Guy’s Grammy winning album The Blues Is Alive And Well (2018) will be released via RCA on 30 September, the 65th anniversary of the day Guy arrived in Chicago from Louisiana.
Listen to the full song below.

Last month, Guy announced the upcoming album along with its lead single Gunsmoke Blues, a powerful and haunting meditation on the ongoing gun violence epidemic in the United States, featuring Jason Isbell on vocals.
Speaking about his approach to performance in an interview with MusicRadar in 2015, Guy said: “If you’d see me play, I wanted you to say, ‘He’s playing his guitar like he don’t care whether tomorrow comes.’ Because if people come see you, I think you should give them every damn thing you’ve got.”
The Blues Don’t Lie is currently up for pre-order. Check out the full tracklist below:

The post Buddy Guy lets his guitar do the talking (and wah-ing) in funky new single appeared first on Guitar.com | All Things Guitar.