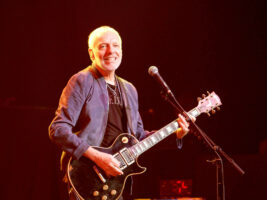 Peter Frampton to perform his final shows seated: “I have progressed in my disease”

Peter Frampton has revealed that due to his health condition, he will be playing while seated on his upcoming final shows in Europe.

READ MORE: Buddy Guy lets his guitar do the talking (and wah-ing) in funky new single

The guitar legend revealed the details of his farewell tour in a new interview with Classic Rock magazine, saying: “Well. . . my legs are not good, and I’ve decided I am going to sit down on these upcoming tour dates in Europe. I can’t stand. That would be dangerous for me now, because I get so carried away when I’m playing that I’m liable to fall over (laughs).”
“It’s starting to affect my hands, but not enough yet, so I can still play a good lick,” said Frampton, who’s quick to share his anxieties about returning onstage again.
“But I’ll be honest, I’m so anxious about it. I haven’t played over there in so long, and I have progressed in my disease. . . I sat down for the first time (at Buddy Holly’s 85th Birthday Celebration) and. . . it felt very comfortable (laughs).”
Asked if he’s had any regrets over the course of his shining six-decade career, Frampton admitted: “Only two things: I would’ve waited to make an album after Comes Alive!, and never put out I’m In You. Breaking All The Rules would’ve been a much better follow-up record. And I wouldn’t have done the Sgt. Pepper movie.”
Back in 2019, Frampton announced his retirement from touring after revealing that he had been diagnosed with a degenerative muscle disease called Inclusion-Body Myositis, which will eventually hamper his ability to play the guitar.
The guitarist told Rolling Stone at the time: “We decided to do a farewell tour now since I don’t want to go out and not be able to play well. If I’m going to do a farewell tour, I want to play good. I want to rock it.”
Due to the coronavirus pandemic, though, Frampton was forced to cancel the 2020 concerts of his finale tour of Europe and the UK — until now.
Check out Frampton’s upcoming tour schedule here.
The post Peter Frampton to perform his final shows seated: “I have progressed in my disease” appeared first on Guitar.com | All Things Guitar.