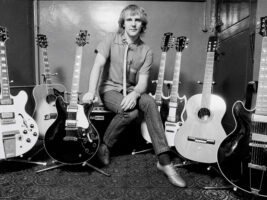 Alex Lifeson is teaming with Julien’s Auctions on a massive auction which will list some of the Rush guitarist’s most recognised and beloved instruments.

Over 100 items will be sold in the Property From The Archives of Alex Lifeson event, set to take place on 20 to 22 May. They include 60 vintage guitars, alongside other musical gear, wardrobe and memorabilia once belonging to the Rush co-founder.
A major highlight of the event is Lifeson’s 1976 “Whitey” Gibson ES-355TD electric guitar, heard on all of Rush’s albums from 1977’s A Farewell To Kings to 2015’s R40. It’s valued at a “conservative estimate” of $200,000 to $300,000.
“I purchased this guitar in 1976, it was custom-built in Kalamazoo just for me. It has been my main guitar and is the iconic Alex Lifeson guitar,” said the 68-year-old guitarist in a statement.
Another notable guitar going under the hammer is Lifeson’s 1980 Hentor Sportscaster, the custom electric guitar which Lifeson played on albums such as 1981’s Moving Pictures and 1984’s Grace Under Pressure.
With an estimated value of between $100,000 to $200,000, the guitar was said to be his “favourite for soloing” and can be heard on the hit song Limelight from Moving Pictures, per a description.
Other notable guitars include a 1981 Gibson Howard Roberts Fusion electric played on Rush tours from 1981 to 2007; the 1976 Gibson Dove acoustic on which Closer To The Heart was written; a 1976 Gibson J-55 acoustic used to compose the band’s platinum-selling 2112 from the same year, and many, many others.

As for non-guitar lots, memorabilia – from personal photographs to original lyric sheets – will also be going up for sale.
“Lifeson’s mind blowing creativity, musical virtuosity and raw power will take center stage here in this epic auction of his legendary guitars, instruments, and rare memorabilia representing his enduring legacy as one of the godfathers of progressive rock metal music,” said Darren Julien, President and CEO of Julien’s Auctions, in a statement.
Learn more about the auction at juliensauctions.com
The post Alex Lifeson auctions off over 60 vintage guitars and other treasured Rush memorabilia appeared first on Guitar.com | All Things Guitar.