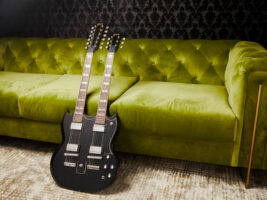 Gibson’s bid to turn rare guitars into assets, which customers could then trade shares of in a system similar to the stock market, is looking bearish.

Last year, Gibson partnered with Rally, a self-described “alternative asset investment” platform, to turn its rare guitars into a “company” through “regulatory qualification”. This in turn splits the ‘company’ into equity shares that can be traded among users.
In Gibson’s case, prototypes of signature guitars for Tony Iommi, Slash and Adam Jones were listed through the service.
At press time, however, only shares for the Slash EDS-1275 Double-neck Gibson Prototype could be traded. The former, which had an initial valuation of $65,000 (13,000 shares priced at $5 apiece), has dipped to just $29,300 with shares going for $2.25 each.
Image: Rally
Meanwhile, shares for the Tony Iommi ‘Monkey’ SG Replica Guitar Prototype appear to have been completely sold at an initial offering for $10 apiece to 580 investors. Its valuation is also set at $65,000.
Gibson still has one more guitar lined up to have its shares sold on Rally: the Adam Jones 1979 Silverburst Les Paul Custom, valued on the platform at $95,000.
Rally’s business practices were questioned by YouTuber KDH, who posted a video yesterday (15 March) about the dip in value on the Slash double-neck.

The topic was also widely discussed on The Gear Page, with many users sharing their views on Gibson’s decision to partner with Rally.
“Sleazy companies like Rally, who offered this scheme should be illegal, and worst of all, shame on Gibson for getting involved. Things like this can only hurt the brand,” wrote one user.
Another said: “Gibson did nothing, they just sold a few guitars at a profit to somebody else and [that] somebody else sold shares in the subsidiary far beyond the value of the guitar and [got] to sell the guitar […] Gibson just found a way to make some money and get some free advertising for a few products, while that other company figured out a way to fleece several hundred thousand dollars out of people.”
Earlier this year, trademark filings made by Gibson Brands Inc. suggested that the guitar giant would be joining in on the NFT craze, with six of its guitar models – the Les Paul, Flying V, SG, Thunderbird, Explorer and ES-335 – being registered with the intent of sale through “multimedia files”.
The post Share prices in Gibson’s stock market-styled collaboration with Rally are plummeting appeared first on Guitar.com | All Things Guitar.