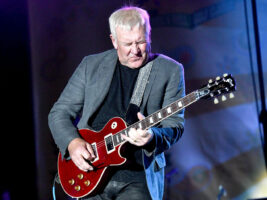 Ex-Rush guitarist Alex Lifeson has firmly denied that the band will ever reunite, following the death of Neil Peart last year.

Speaking to Eddie Trunk on SiriusXM, Lifeson noted that he and bassist/vocalist Geddy Lee are still in touch: “I talk to Ged every couple of days or so. We try to get together for dinner. That’s been a more challenging thing lately.” He then touched on the possibility of a creative collaboration: “If there’s something that comes up in the future, an opportunity for us to do something, we’ll decide over a cup of coffee what that’ll be,” he said.
“But there’s no urgency or there’s no pre-planned thing now. He’s doing whatever he’s doing, I’m doing whatever I’m doing, and we keep each other informed and stuff like that, but, God, we had such a great history and did so much great stuff together, it’s not really a big deal if, for the rest of our lives, we’re just best friends.”
“Everything that we’ve done, we’ve always done to satisfy ourselves before anybody else,” he said. “I think Rush fans understood that and were always very supportive – very critical at times too, but always supportive. And that was the nature of our relationship with our fans – it was a really good two-way relationship.”
With this noted, Lifeson made it clear that whatever potential collaboration may come of his and Lee’s friendship, and whatever solo material each makes, it won’t be Rush. “Rush ended in 2015,” he added. “There’s no way Rush will ever exist again because Neil’s not here to be a part of it. And that’s not to say that we can’t do other things and we can’t do things that benefit our communities and all of that. I have lots of plans for that sort of thing that don’t necessarily include Geddy.”
Rush’s final tour took place in 2015, after which Peart decided he wanted to retire while still able to perform well. Lifeson reflected to Trunk how at the end of the tour, he, Peart and Lee were all fatigued enough to need the break of retiring Rush: “in all, it really turned out to be the opportune time for us to end a long career. Not a lot of bands lasted 40 years of that regular touring and many, many, many albums and all of that stuff,” he said.
Following the band’s retirement, Peart was diagnosed with brain cancer in mid-2016, news which was kept private amongst his friends and family. After a three-and-a-half-year battle with the illness, he died in January of 2020.
The post Alex Lifeson says there’s “no way Rush will ever exist again” appeared first on Guitar.com | All Things Guitar.