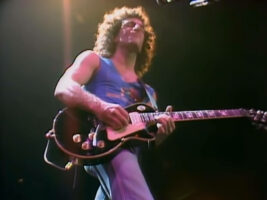 The electric guitar played by Neal Schon on many of Journey’s hits from their record Escape, including Don’t Stop Believin’, is going up for auction this month.

READ MORE: Journey release first new music in a decade, The Way We Used To Be

The guitar itself is a black 1977 Gibson Les Paul Deluxe, sporting the notable addition of a Floyd Rose double-locking tremolo. The neck pickup is also non-standard, being a DiMarzio single-coil-sized rail humbucker, sitting below what looks to be a Fernandes Sustainer system.
It was used extensively on Journey’s record Escape, including on Stone in Love, Who’s Crying Now and Glee-covered megahit Don’t Stop Believin’. Escape launched the band into worldwide success, becoming nine-times certified platinum. The same black Gibson Les Paul was also used on the ensuing stadium tour.
The guitar is signed by Neal on the back of the headstock in silver ink, and bears a Ferrari sticker placed on it “years ago.” It weighs in at 4.8 Kg / 10.8lbs and comes in a Journey-stenciled flight case. Hear it in action below.

The sale is part of the Neal Schon collection auction, which will see a huge number of guitars from the Journey guitarist go under the hammer. Notably, there’s not one but two 1959 Burst Les Pauls going up for auction – often viewed as the Holy Grail of Les Pauls. Alongside these, there’s a pair of Gold Top Les Pauls from 1957 and 1958.
See a trailer for the full auction below, and the full collection here. Bidding begins on 12 July, and ends on 31 July.

The post The guitar used to record Don’t Stop Believin’ is going up for auction appeared first on Guitar.com | All Things Guitar.