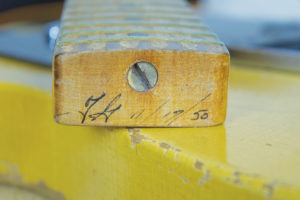 All About… Tadeo Gomez

Fender’s greatest-ever neck carver was an orphaned migrant worker who walked a thousand miles to get to America. Huw Price profiles the legendary Tadeo Gomez…
A Fender Strat pictured at Capsule Music in Toronto with neck initialled by Tadeo Gomez and dated October 1954 © Getty Images