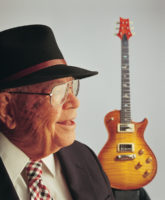 All About… Ted McCarty

The August 2020 issue of Guitar Magazine is out now!