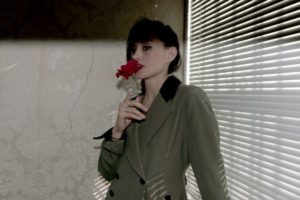 “I wanted an underground darkness that was as clear as possible – I never like things to be too bright,” Theresa Wayman tells PSNEurope over a cup of green tea in the bar of a busy central London hotel, describing the blueprint for LoveLaws, her spellbinding self-produced debut solo album. “It’s just the nature of me.”

We find Wayman, operating under the name TT for the purposes of her new record, in the midst of a rigorous schedule of promotional and live session commitments when we sit down with her on a blustery afternoon in the capital. The Warpaint co-founder and guitarist has just arrived from LA, but despite her jetlag and the intense workload that awaits, is in high spirits and talkative mood. And it’s easy to see why, given the formidable body of work she’s just signed off on.

Her ambition to create the darkness and clarity of which she speaks is something she has achieved unequivocally, each track playing out over a sonic canvas as dark as the bottom of the ocean, pierced with just enough shafts of sunlight to entice its listeners inside. Throbbing electronic beats and woozy synths are intertwined through each of its 10 tracks, while Wayman’s featherlight vocals make for a mesmeric listening experience that will be immediately familiar to fans of Warpaint, yet still bears the hallmarks of a solo record. Where Warpaint’s collaborative sound has evolved around extended jams over their three albums to date – The Fool (2010), Warpaint (2014) and Heads Up (2016) – LoveLaws is unmistakably the result of a singular vision, thematically and sonically.

As its title implies, it is an album concerned with the exploration of love in all its light and shade, not only through Wayman’s lyrics but also through her approach to its recording and production.

“I wanted a mood piece, something that has an internal, intimate feeling, while also being able to reach the more obvious places and crossover into a world where people who don’t necessarily listen to ‘that kind’ of music will be able to get it,” she explains. “I like making things sound fucked up. That usually means reverb, some modulation and distortion. I like finding ways of making things sound different to just a clean vocal and a clean guitar.”

Recorded over the past two years between Wayman’s bedroom and Warpaint’s LA rehearsal studio, known by the band as The House On The Hill, and co-produced with her brother Ivan Wayman – two of the tracks were also recorded and produced with Dan Carey at his London studio – LoveLaws is an album that, in many ways, has been almost a decade in the making.

“In 2010 I started learning how to use Logic and how to programme drums using UltraBeat,” she says. “Then someone turned me on to Geist, a drum machine I love. The workflow works perfectly for me. Over the years I’ve amassed a collection of songs in different states of completion. About a year and a half ago I was going back over everything and realised I had enough to develop into an album, so I picked out the ones I liked best and approached my brother, who is a musician and producer, and asked if he’d like to take them out of my computer and expand them and put live drums on them. He said yes and that’s when we started the album.”

Having co-produced the past two Warpaint records with her bandmates alongside Flood (Warpaint) and Jake Bercovici (Heads Up), Wayman says one of the key lessons she has learned is not to waste time “chasing the sound of the demos” and to start building up the tracks from their conception.

“Demos don’t exist anymore,” she states. “On our first album we went into the studio with demos and tried to remake them, which is a really weird thing to do, in my opinion. We were just chasing the sound of the demo forever, and we were never happy with it at the end. It didn’t have that spark, that inspiration. A lot of artists feel this way. Now we always build from the demo, that’s essentially what I was doing with these songs. It’s the home studio thing that’s taken hold now and makes it possible to do anything anywhere. Now you can make a demo or start a track anywhere and then take it to a real studio and build on it.”

Like many of the Warpaint tracks on which she provides the lead vocal, Wayman’s voice is often the distinguishing feature on many of LoveLaws’ highlights. Her delicate delivery on tracks such as Love Leaks and Take One breathes life into these sparsely constructed compositions, lending a transcendent quality to match anything she has put her voice to to date. Much of this is due to her tried and tested approach to vocal recording.

“I record all my vocals and a lot of the guitar through my Apogee into a DAV preamp and then a Lunchbox, which is modelled after an API preamp – it’s a lot less expensive, but it sounds great. It’s a perfect set up,” Wayman beams. “I don’t need anything else for vocals and I feel really comfortable doing my own voice because I can work really fast. If there’s something I don’t like or I need to fix I can just go back and I don’t have to tell anyone what to do – I just know what my process is. And I feel much more relaxed when I’m in my own environment.”

To capture her vocals, Wayman relied on a range of different microphones in the studio.

“I mostly used a RØDE NT1,” she says, scrolling through her phone to show us a picture of the mic in question. “We got a bunch of mics from RØDE gifted to us and I never knew I even liked them, but I just grabbed one and I’ve been using it for a couple of years now, it sounds great. That set up for me with the Apogee is just golden, and you can use that preamp for the guitar as well; it really gives a nice boost to the sound. The Apogee preamps aren’t bad either. It’s perfect for someone who’s travelling; it means I can take my rig on the road.

“There’s another mic I’ve started using live that I really like,” she continues, rifling again through images on her phone. “It’s a Telefunken M80,” she says presenting us with a picture of said model. “I use that on a couple of tracks on the album, but I don’t like singing that way when I’m recording for some reason. I like recording vocals really intimately. It was something I couldn’t reconcile in myself for a while because I felt like I was being false, as that’s not how I can perform live with Warpaint. But it’s how I want to perform. It’s been really nice lately just playing piano and some bass – I’ve been doing some stripped back sessions and I can really hear my voice and control it, which is so fun. I used to hate singing! It was like it was secondary to the music for me and I didn’t give it priority.”

With Warpaint’s writing and recording process so heavily centred on the collaboration between each of its four components, Wayman is relishing the creative freedom LoveLaws has afforded her in the studio.

“It’s so fun and freeing,” she says. “Sometimes people ask which I prefer – the PC answer is Warpaint! – but when I’m doing my own thing I get to explore more and do things I don’t usually do, and that’s really fun for me. But that’s also because it’s new and not as tried and true as Warpaint. We’ve all been doing that for so long and I’m sure everyone feels the same way.”

She continues: “Sometimes when I was working on songs I’d get in a flow and put bass, guitar, drums and vocals down and it’d be too full to bring to Warpaint: it wouldn’t be fair to bring a fully complete piece and say, Add a little cowbell, girls! I know when something is not for the band and there were some songs I intentionally kept bare so that I could take them to the band. There is music on our albums that started the same way that my album was started, so there is that connection.”

While LoveLaws is every bit a product of 21st century methodology, from its inception to its recording and production techniques, Wayman took her audio cues from some of the last century’s foremost sonic pioneers.

“Dummy by Portishead (self-produced) and Mezzanine by Massive Attack (produced by Neil Davidge) were both really big for me when I was a teenager,” she recalls. “I remember listening to them and thinking, How the hell was that made? It wasn’t like listening to a rock record; it’s not obvious. Bjork, too, with her first three albums. She was producing her own sounds from the geysers in Iceland and making songs that have all these different threads. It’s like, I don’t know what instrument I need to play but I need to get this type of sound – it could be anything.”

Though LoveLaws is very much the centre of her attention at present, Wayman is keen to flex her production muscles beyond her own compositions.

“I’m excited to know more about the technical side of production; I’d like to be able to record more stuff myself and get to the point where I can produce others, too There’s a band I co-produced with my brother called Secret Garden. The singer from the band was a Warpaint fan and she sent me some of her music and I loved it. I said, If you want to take a day we’ll record you. We kept the process simple, but it was really fun.”

If the process of making LoveLaws has taught Wayman anything, it’s that she has plenty more avenues to pursue as an artist, musician and producer. Many will be curious to see how her experience making LoveLaws manifests itself on the upcoming Warpaint record – currently in the early stages of development – but given what she’s achieved on her maiden solo excursion, fans of the band have much to be excited about.

“I feel like I’ve only scratched the surface of what I want to create,” she concludes. “I get such a kick out of solving the problem of the song: feeling it, putting it out, making something and then trying to solve its puzzle. Just doing that and being able to play and figure it out on my own is, for the most part, really fulfilling. And it’s new, so I want to keep going with it. That said, Warpaint is making another album, and that’s really exciting.”