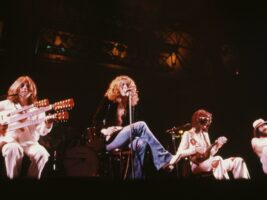 Rumours have begun that a new campaign for the highly-anticipated Led Zeppelin film will be arriving shortly. First announced back in 2019, the upcoming biographical film, entitled Becoming Led Zeppelin, appears to be closer to completion than ever before, with social media pages already being created for the picture.

Reported yesterday (July 24) by Led Zeppelin News, an unofficial website which shares updates and rumours regarding the band, it has been confirmed that numerous pages have been created across social media to promote Becoming Led Zeppelin, a film which is speculated to be released in the near future.
Web domains, Instagram accounts, Facebook pages and Twitter handles have been noticed to come into existence lately – leading to rumours that an online promotional campaign is on the horizon.
While not available to the public or containing any posts as of yet, fans suspect that this development means that an official release date for the film should be confirmed soon, over three years since it was first announced.
Details on the film remain relatively secret to the general public up to now. That being said, it has been said that all surviving members of the band participated in the picture and the final product was sent to post-production by the end of 2019, meaning filming had already been completed by that time.
In September last year, it was reported that multiple screenings of the film took place at the Venice Film Festival; a decision that resulted in mixed reviews from critics and complaints that the 147-minute run-time was too extensive.
Since then, there has been no news regarding when the public should be able to see the final product – leading to rumours that the feedback received at the film festival may have resulted in the film being re-edited.
For now, all online accounts remain dormant and mostly hidden from the public eye, however, it seems that eagle-eyed fans are already getting their hopes up that an official release date for the film may be released shortly.
Find out more about the speculations on LedZepNews.
The post An official release date may be around the corner for the long-awaited film Becoming Led Zeppelin appeared first on Guitar.com | All Things Guitar.