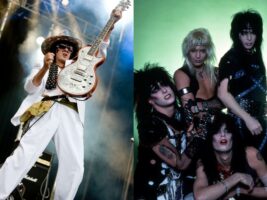 Former Hanoi Rocks guitarist Andy McCoy has recently launched a verbal attack on Mötley Crüe. In the interview, the musician claims that the band exploited the death of the Hanoi Rocks drummer Razzle in their biopic and states that Nikki Sixx lies to fans by fabricating his anecdotes.

Speaking as part of the Waste Some Time With Jason Green Show last Saturday (July 23), the co-founder and lead guitarist of Finnish glam band Hanoi Rocks refused to hold back when sharing his thoughts on the infamous Mötley Crüe.
Previously speaking out against the band on numerous occasions, McCoy has often criticised the members due to the role they played in the death of Nicholas “Razzle” Dingley, Hanoi Rocks’ drummer in 1984.
Killed as part of an alcohol-fuelled car crash, the incident occurred when the band were partying with Mötley Crüe during their first-ever US tour. Here, an intoxicated Vince Neil attempted to drive himself and the drummer to a local liquor store – eventually crashing his De Tomaso Pantera into an oncoming vehicle.
Discussing his frustration at how the event was portrayed in the band’s 2019 biopic The Dirt, McCoy accuses the members of glamorising Razzle’s death and labels the film “pure lies and bollocks”:
“The party in that movie [is] in some mansion. You know what really happened? We were in a two-bedroom apartment. It was five people there,” he states. “When I saw that movie, or clips of it, I was, like, ‘I don’t wanna see the whole movie. This is bullshit again. Hollywood bullshit’… The movie is just pure lies and bollocks again. And I can’t go for that kind of crap. I want the reality out.”
McCoy expands these accusations of lying even further, also claiming that the band’s bassist Nikki Sixx fabricates his anecdotes and lies to fans. Referring to the musician’s claim that he was beaten up by a drug dealer after overdosing in London, McCoy states:
“He’s lying. I used to play baseball as a kid. If I beat someone up with a baseball bat who’s unconscious, you think he’d live? Hell no. Hell no, bro,” he says. “He was not beaten. He was slapped around to be woken because he overdosed.”
Elsewhere in the interview, the musician continues to criticise the band further, discussing his disdain towards Mötley Crüe’s choice to come out of retirement and undertake what he considers to be yet another farewell tour:
“[This is] their 25th goodbye tour or something. [Laughs] Fucking ripoffs,” he states, later justifying his outspoken attitude towards the band. “I speak the truth, mate. I don’t lie, like Nikki Sixx, through my fucking teeth.”
Find the full interview with Hanoi Rocks’ Andy McCoy on the Waste Some Time With Jason Green Show.
The post Hanoi Rocks guitarist calls Mötley Crüe liars and “fucking ripoffs”, states that their biopic was “pure bollocks” appeared first on Guitar.com | All Things Guitar.