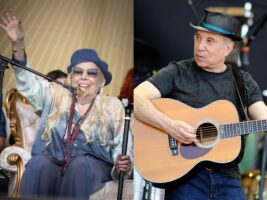 This weekend (July 23 and 24), music legends Joni Mitchell and Paul Simon took to the stage at the 2022 Newport Folk Festival for surprise performances. Joni Mitchell’s first time playing a live show since 2013 and Paul Simon’s first time performing since his retirement four years ago, the event left fans stunned and gave contemporary artists the opportunity to play alongside two pioneers of folk music.

READ MORE: Ed O’Brien On A Possible Radiohead Reunion: “We’re Not Going To Be One Of Those Bands That Gets Together For The Big Payday”

Joni Mitchell’s first full live set in over twenty years, music-lovers attending the annual festival were left awestruck as the legendary songwriter took to the stage on Sunday (July 24). Playing a series of her classic tracks including A Case Of You and Both Sides Now, the musician performed alongside Brandi Carlile, who has regularly expressed a love for Mitchell’s discography.
What’s more, fans attending the event also saw the folk legend perform the guitar solo from her track Just Like This Train, find footage of the moment below.

This event was the first time Joni Mitchell has performed at the festival since 1969. Now, dubbed the “Joni Jam” by fans, this most recent appearance saw the songwriter perform alongside a number of contemporary artists including Marcus Mumford, Blake Mills, Wynonna Judd, as well as many others.
Not the only legendary musician to have played a surprise set at the festival, those who attended the event the day prior (July 23) also bore witness to the unannounced performance by Simon and Garfunkel co-founder, Paul Simon.
Coming out of retirement to perform the set, the eighty-year-old music legend delighted fans as he was introduced to the stage by Nathaniel Rateliff during his performance alongside the Night Sweats.
Up until this point, Rateliff had already been playing some of Simon’s most famous tracks alongside musicians such as Lucius, Natalie Merchant and Lee Fields. It was later on in the set that Paul Simon was welcomed to the stage, from which the duo launched into a rendition of the musician’s track Graceland.
The songwriter also performed other tracks during his performance, including a stunning and sombre cover of his song The Boxer alongside Rhiannon Giddens, and finally, a long-awaited solo rendition of his most famous creation, The Sound Of Silence.
While undoubtedly a once-in-a-lifetime opportunity for the new generation of fans attending the festival, there has yet to be any further announcements regarding future performances from either Joni Mitchell or Paul Simon.
Find footage from Paul Simon’s set at the Newport Folk Festival below.