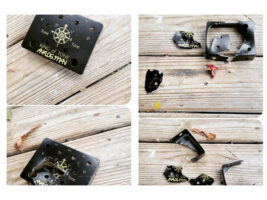 Analog Man’s Mike Piera has shared some images on social media of a destroyed copy of his King Of Tone overdrive pedal, stating that a similar fate awaits other clones that try to enter the US.

READ MORE: “We don’t have our pedals on shelves ready to ship”: Analog Man’s Mike Piera on his customer-driven approach

Taking to Instagram, Piera captioned a series of photos: “US customs will now be doing this to the fake pedals coming in from China, sorry dude. #analogman #counterfeit.” In order, the photos showed the Instagram account of 68 Pedals, a Chinese pedal company, and two photos that showed a pedal enclosure – one that looks pretty similar to that of an Analog Man King Of Tone – being progressively destroyed. These photos look to be from screenshots of Instagram’s direct message feature, presumably being sent to 68 Pedals.

68 Pedals has made it no secret that it creates a clone of the King Of Tone, as you can see in the below Instagram post.

However, a pedal exactly like the above “King Of Clone” would likely not meet the same grisly fate as the one Piera showed being destroyed. When asked to clarify by a commenter if “all of” the cloned pedals would be destroyed, Piera clarified: “Anything with our trademark on it.”
Analog Man LLC currently owns the wordmark ANALOG.MAN. The circuits of arriving pedals are not what is infringing about these clones – in most cases, it is difficult to patent or trademark a circuit as simple as a guitar pedal, hence the thriving market for clones and sound-alikes.
In response to Piera’s post, some commentators did note they had experience with pedal builders who advertised a bowdlerised version of their clones on retailer listings, but would post out pedals with the exact same artwork as the real deal.
It’s unclear from his post whether Piera is accusing 68 Pedals of this practice. At the moment, 68 Pedals does not advertise its King Of Tone clone on its Reverb storefront, and all of its historical marketing material for the pedal displays a pedal with 68 Pedals’ own (but very similar) enclosure design.
However, 68 Pedals is not the only builder cloning the pedal: with just a little searching on a site like Aliexpress, it’s possible to find a clone that does use Analog Man’s trademark. It’s possible Piera was using the company as a general example of an overseas pedal company that clones Analog Man pedal designs. Guitar.com has reached out for clarification.
The post Analog Man’s Mike Piera posts photos of smashed King Of Tone copy, allegedly destroyed by US Customs appeared first on Guitar.com | All Things Guitar.