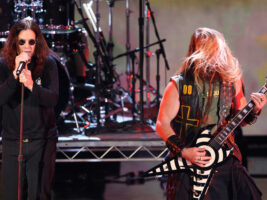 Ozzy Osbourne has confirmed that Zakk Wylde will be present on his next solo album for more than just one song. In fact, he’s going to be on every track.

The revelation comes after Ozzy shared that Jeff Beck, Eric Clapton, and Tony Iommi would also be appearing on the record. He mentioned Wylde alongside those names, leading some to suspect Wylde would be taking a guest spot alongside these other guitarists.
However, he cleared up any confusion during a stream from the podcast The Diary Of The Madmen – The Ultimate Ozzy. In the live chat alongside the podcast, Ozzy was asked: “Does Zakk play all of the rhythm guitars on the new album?”
He responded: “Yes Zakk plays on the entire new record. He was home from tour this time unlike when I did Ordinary Man.”
Last month, Zakk Wylde hinted at his extended involvement in the project, explaining to MusicRadar that “[Jeff Beck’s contribution] definitely sounds slamming. The same goes for all the guys – what Tony Iommi played, and then Eric Clapton and Jeff Beck, it’s all killer for sure.
“On those tracks I’m playing rhythm guitar for my heroes… It’s crazy! It sounds awesome and I’m beyond honoured to be doing it.”
Ozzy’s 2020 record Ordinary Man was recorded with producer Andrew Watt playing guitar, who is also helming the desks on the as-yet-untitled upcoming album. Speaking to Guitar World earlier this year, Watt teased even more A-list guest contributions: “There’s a bunch of people involved. I can’t say for sure until the end, but I started doing a bunch of basic tracks with Chad [Smith, drummer for the Red Hot Chili Peppers] and Robert Trujillo [bassist for Metallica], who used to play in Ozzy’s band. And [Foo Fighters drummer] Taylor Hawkins also came in and played a bunch on the record as well.”
The post Zakk Wylde to play guitar on all of Ozzy’s new solo album appeared first on Guitar.com | All Things Guitar.