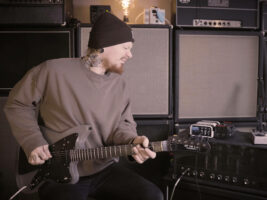 READ MORE: Fuzz Was The Future: Distortion was destiny

The band shares a name with the JPTR FX’s recently-released fuzz pedal, which was its take on the op-amp Big Muff. In keeping with the brand’s signature style, the pedal offered up heaps of noisy distortion, inspired by the textural guitar tones of late 90s Seattle grunge bands.
Chris Jupiter plays guitar, with Yannick Arndt on guitar and vocals, Felix Moritz on backing vocals and bass, and Frauke Gerdes on backing vocals and drums.
Unsurprisingly for those who follow JPTR FX’s YouTube channel or know what their pedals sound like, the debut tracks from Warlow are both slabs of grungy noise-rock/doomgaze, mixed with a little post-rock.
Fans also got a sneak peek at Warlow’s new music thanks to Hop Pole Studios, who mixed the track. Over on the Hop Pole YouTube channel, Adam Steel live streamed a few sessions of him mixing the new releases.
You can check out Credits on JPTR FX’s YouTube channel below, and Polite Smile on the band’s Spotify page here.