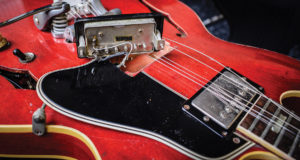 Andy Scott’s red ES-335 starred on the Sweet’s remarkable string of glam hits in the early 1970s. Steve Clarke gets up-close with this storied Gibson and busts a few myths about it along the way…
Before Ballroom Blitz, Teenage Rampage and Hell Raiser lit up the charts, Sweet guitarist Andy Scott – then a member of Welsh psych-rockers The Elastic Band – saw Deep Purple’s Ritchie Blackmore playing a Cherry ’61 ES-335 fitted with a Bigbsy B5 and simply had to have one of his own. Scott’s guitar – housed until recently at the British Music Experience in London’s O2 Arena and now in residence at Liverpool’s Cunard Building – was a ’63 block-neck model purchased from a store in Manchester for the princely sum of £100 shortly before he joined the Sweet in 1970.
When Scott first encountered the instrument, it had a small battery-powered treble booster fitted where there’s now a metal cap on the top of the lower cutaway. It delivered a driven tone but made the guitar feed back too much and was removed as a result. It was also speculated that the guitar had been assembled from two separate ES-335s, as it features two distinct serial numbers: one on the back of the headstock and another on the orange label inside the body. The story goes that this was because a fire had broken out in the warehouse of Barratts Music Shop, damaging two guitars but leaving one body and one neck unscathed.
The Bigsby fitted on Andy’s 335 is a B5, as opposed to the B7 units more commonly seen on Gibson semis
No Smoke Without Fire?
To get to the bottom of this, we managed to track down Brian Higham, the former manager of Barratts, now retired and living on Anglesey in North Wales. “I worked there on and off from the late 50s to 1978” he recalls. “The fire was around 1967 or ’68 and started in the drum shop on the corner of Oxford Road, and the guitars were at least 100 yards away, separated by a pub called The Oxford but part of the same building.”
Brian insists that no guitars were involved in the fire but remembers one of the staff had to jump from the first floor window when the fire broke out. The fire even made the local press at the time. He also suggests that one of the staff may have mentioned the recent fire in an attempt to provide a prospective buyer with a credible story to explain the serial number discrepancy, before selling the guitar at the discounted price of £100. According to Brian, second-hand 335s would sell for anything between £100 and £125 in the late 60s. Will taking a closer look at the guitar reveal the truth?
There’s a ground wire attached to the bridge pickup – a mod that may have been done when the guitar had its now-removed treble booster fitted
Behind The Glass
We arrive at the Cunard Building at 7am and have roughly an hour to examine the ES-335 as it needs to be back under glass in time for the British Music Experience’s 9am opening time. The guitar’s outline is very much a transitional example – not quite the full ‘Mickey Mouse ears’ of the earliest ES-335s but its horns aren’t as narrow as they would become soon after. The Cherry finish has faded a little as expected, with a light maple figure visible through the translucent red.
The instrument’s time under lock and key in London and Liverpool has helped preserve it, although it bears the scars of a headstock break that took place in 1978, when Scott spun around on stage in Australia and smashed it into the drum riser. Luthiers at Aussie guitar company Maton were responsible for the repair.
Inside the bass-side f-hole, the orange label is stamped with the serial number 120808, while the back of the headstock features serial number 121813. There could be several reasons for the discrepancy – simple human error is most likely, as the internal label would have been applied at a different stage in the production process to the headstock stamp. Someone may simply have typed the wrong number on the label.
At some point a treble booster was added to the guitar, but it was removed and the hole was plugged

The routing is very clean and the red lacquer just under the pickup surrounds (stamped M8 788) is slightly darker having not faded. The screws are also original. The bridge pickup gives a reading of 8.79k ohms and retains its patent number sticker. There’s also a ground wire soldered to the pickup base but is not a Gibson spec. This may have been done when the treble booster was fitted, as its higher output and sensitivity would have increased noise. Once again the cover looks to be original and shows plenty of wear.
Pictures of this guitar from around 1971 show metal saddles on an ABR-1 bridge with no retaining wire. The bridge today has five nylon saddles, one metal one on the bottom E string and also a retaining wire. The threaded posts upon which the bridge sits are 72.88mm wide point to point: the bridge is 84.57mm wide and is a tight fit.
The body label features a different serial number to the headstock
Sweet Music Everywhere
Using our small Fender for testing, the bridge pickup is bright with lots of top end harmonics on a clean setting. Flick to overdrive and it is a hellraiser: no mud, just hugely dynamic and a perfect riff sound. The middle position has a lovely openness and the neck unit is a warm tone monster. Backing off the volume tames the attack but leaves a lovely edginess and makes for a really expressive sound.
To hear it for yourself, search online for video footage of Andy on Musikladen in 1974 playing Sweet FA, which not only demonstrates his ability and control over the Bigsby but the tonal variety that he achieved using this guitar.
If you delve deeper, beyond the band’s hit singles, you’ll hear just how wide a tonal range this guitar offered in Andy’s capable hands. Behind the visual glitter of the glam era there was real substance and ability and The Sweet were undoubtedly a well-drilled band of accomplished musicians.
Special thanks to Kevin McManus and Olly Taylor at the BME and of course Andy Scott. Steve Clarke is an experienced guitar tech who can be contacted at famousfrets.comThe post Andy Scott’s ES-335 – Block Buster appeared first on The Guitar Magazine.