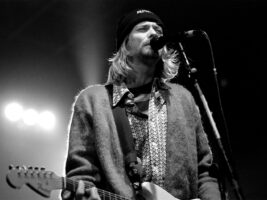 Spencer Elden, the baby seen swimming naked on the cover of Nirvana’s 1991 album Nevermind, is suing the band for “child sexual exploitation” and “violations of federal criminal child pornography statutes.”
A court document [obtained by Pitchfork] claims Elden’s legal guardians nor he consented to his image being used on the famed album cover, which the suit characterises as “commercial child pornography” and that he “has suffered and will continue to suffer lifelong damages” as a result.
“The broad distribution of Spencer’s child pornography has caused him severe harm, including physical, emotional, reputational, and financial harm,” the lawsuit states.
The lawsuit further claims “Cobain agreed to redact Spencer’s image” with a sticker covering his genitalia, but never delivered. The sticker was to bear the text “If you’re offended by this, you must be a closet pedophile” – as detailed by the 1993 Nirvana biography Come As You Are: The Story of Nirvana.
Photo: Nirvana
The document argues the band “failed to take reasonable steps to protect Spencer and prevent his widespread sexual exploitation and image trafficking” and that Elden was also not compensated following the commercial success of Nevermind.
Elden is seeking actual damages – or $150,000 in liquidated damages – from each of the suit’s defendants, namely: Nirvana’s surviving members, Dave Grohl and Krist Noveselic; the estate of Kurt Cobain, its executor Courtney Love and its managers Heather Parry and Guy Oseary; former Nirvana drummer Chad Channing; Universal Music, Warner Records, MCA Music and Geffen Records; Kirk Weddle, the photographer from the shoot; and Robert Fisher, the designer of the cover.
The defendants have yet to publicly comment on the lawsuit.
Elden has recreated the cover of ‘Nevermind’ several times over the years to mark different anniversaries of the record. In a 2016 interview with TIME, however, he expressed that he was unhappy with the use of his image on the album cover and that he had unsuccessfully looked into taking legal action against label Geffen Records.
“It’s hard not to get upset when you hear how much money was involved,” he said. “[When] I go to a baseball game and think about it: ‘Man, everybody at this baseball game has probably seen my little baby penis,’ I feel like I got part of my human rights revoked.”
The post Baby on cover of Nirvana’s Nevermind reportedly suing the band for “child sexual exploitation” appeared first on Guitar.com | All Things Guitar.