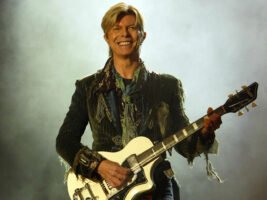 The Genius Of… The Next Day by David Bowie

In decades past, a level of detached mystery – and the ability to craft an entirely original, modern mythology – was central to the appeal of many of pop’s biggest figures. For David Bowie, the Mount Olympian influence that celebrity granted would be an ongoing fascination throughout his career. Exploring this dynamic, Bowie clad himself in the garb of superhuman, semi-magical figures such as glam rock titan Ziggy Stardust, and the enigmatic Thin White Duke, revelling in the many layers of artifice a pop star could wrap themselves in, while also being gifted with the ability to generate era-defining, life-changing records.

READ MORE: A New Way To Play: Meet the guitarists who are taking over TikTok

After nearly 40 years of astounding creative and commercial success, Bowie showed few signs of slowing. With 2002’s compelling Heathen rapidly followed up by 2003’s exuberant Reality, Bowie seemed to be as creatively inflamed as he was during the making of his matchless 1970’s run of records. In 2004 however, during the globe-spanning A Reality Tour, a terrifying heart scare at the culmination of a show at Germany’s Hurricane Festival cut short the tour’s originally intended run time, and marked (what many thought would be) the end of the 57-year-old Bowie’s professional career, as he stepped back into the shadows.
For the rest of the 2000s, the New York-based Bowie was rarely seen, bar a few fleeting appearances to signal his endorsement of the latest crop of cultural movers and shakers (notably, with Arcade Fire, at Fashion Rocks in 2005, and with Ricky Gervais, performing the hilarious Pug Nosed Face on Extras) But, for his worldwide congregation of devotees, the promise of serious new music – an ever-present thread that had been running since Bowie’s debut in 1967 – wasn’t forthcoming.

Where are we now?
It wasn’t long before Bowie’s band resigned themselves to the realisation that their figurehead had quietly retired either. As the years passed, Gerry Leonard, Bowie’s mainstay guitarist and band leader since Heathen, was enjoying a varied career as both a touring guitarist and musical director for Suzanne Vega and Rufus Wainwright, as well as composing soundtracks for film and theatre. It came as something of a bolt out of the blue when an email from Bowie suddenly appeared in Leonard’s inbox, asking if he was free to work on some new material. Though he was keen to reunite with his former boss, Bowie insisted that he, and the other musicians on the record, would have to ‘keep schtum’ during the recording process.
Gerry Leonard explains to us that whenever he worked with David, there was an attitude of ‘bring your junk’ in guitar and tech terms, though there was the caveat that space was going to be minimal. “We knew we wanted to track live and so we needed isolation,” Leonard explains. “But the space was tight as always in NYC. I ended up using two Mesa/Boogie 1×10 speaker cabs powered by my amps of choice (Mesa TA-15 and Sommatone Roaring 40 mostly), I had my usual live guitar rig (a smaller tour rig) with a switching system which allowed me to set up the songs like a live show with snapshots for each section.”
Across the recording process, Leonard mainly stuck to a trusty triumvirate of Gibsons. “I used my ’69 Gibson SG, my ’65 Gibson Firebird with P-90s and a custom Les Paul with Bigsby,” details Gerry. “My effects rig was really a combination of things: TC Electronics G Force, Electro-Harmonix POG and Big Muff, Tube Screamer and also some Lovetone pedals – the Big Cheese and Doppelganger. One piece I rarely use but brought out for the record was the EMS Synthi Hi-Fli. That thing is super rare and has such a killer vibe. I had it patched on and used the vibrato, filters and fuzz quite a lot.”
Meeting up with Bowie’s longtime producer Tony Visconti and drummer Sterling Campbell, the team set to the task of getting the new tracks worked up. “Sterling Campbell was on drums, I was on bass, David was on keyboards, Gerry Leonard was on guitar,” Visconti told The Telegraph. “By the end of five days we had demoed up a dozen songs. Just structures. No lyrics, no melodies and all working titles. This is how everything begins with him. Then he took them home and we didn’t hear another thing from him for four months.”
At the conclusion of the writing sessions, recording began at The Magic Shop and Human Worldwide Studios, with Bowie’s bass alumni Gail Ann Dorsey returning to helm the low end, and rhythmic heavyweight Zachary Alford heading behind the kit. Wishing to avoid press intrusion, label pressure or indeed the crippling weight of audience expectation, Bowie was keen to keep everything pertaining to The Next Day (and his personal life) tightly under wraps.
“I’ve owned this studio for 26 years, but I’ve never experienced the level of secrecy we had to achieve for David’s album,” said Steve Rosenthal, the owner of New York’s The Magic Shop in an interview with LouderSound. “Each time David came to the studio we allowed about 60 per cent of our staff to take time off, because the more people who knew, the more danger there was of the story getting out.”

For more reviews, click here.
The post The Genius Of… The Next Day by David Bowie appeared first on Guitar.com | All Things Guitar.