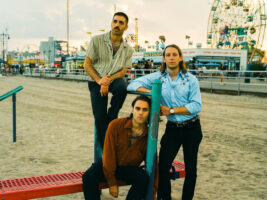 Bambara revel in the drama and uncertainty on new LP, Mythic Love

“I think it was hard for us to completely get lost in the music we were creating when there was so much uncertainty about our lives,” Reid Bateh admits of the scrapped recordings Bambara made ahead of re-recording their new mini-LP, Love Is On My Mind. Indeed, the decision to restart the entire recording process might sound excessive, but dishonesty is not in Bambara’s collective vocabulary. The guitar work and songwriting on their newest body of work confirms they made the right decision.

Driven by the approval of BBC Radio 6 Music in the UK and KEXP’s John Richards in the US, Bateh and co chose to push on from the cinematic punk of 2020’s Stray into more precarious territories. Citing the work of seminal photographer Nan Goldin as a central influence in his lyricism, Bateh moved outwards to develop characters and narratives that thread the mini album together, which he says is a way of “presenting pieces of the story through her snapshots.”
With a newfound autobiographical intimacy, Bambara reconvened in New York and recruited Bria Salmena of Frigs and Orville Peck to elevate the emotion and vocal harmonies, whilst also composing alongside Jason Disu and Jeff Tobias of Sunwatchers, to include the depth and grandiosity of trombone and saxophone respectively.
In contrast to this maximalist approach, Bateh’s guitar work has erred on the side of simplicity throughout Love Is On My Mind. A keen user of Jazzmasters, his former rig consisted of complex stereo rigs that were also routed through front of house PA systems, plus multiple pedalboards. He’s now flipped the switch, preferring a more considered setup that consists of just one Fender Deluxe and a small array of delay and reverb pedals. “I like to hear the sound of the strings and the wood and the way they naturally interact,” he admits. This laser focussed approach has resulted in arguably the trio’s best set of songs yet.

You’ve received significant support and championing from KEXP in the US, and Steve Lamacq’s 6 Music in the UK. How has that impacted the band?
“It’s been nice because both stations have pretty devoted fan bases that are constantly looking for new music. There is so much music these days that it can be overwhelming to know where to look, so having support from someone like Steve Lamacq goes a long way. People tune into his show expecting to hear what he’s selected at the moment.”
Why did you scrap the first version of this new collection of songs?
“We started writing the EP almost immediately after eight months of tour dates were completely cancelled. I think it was hard for us to completely get lost in the music we were creating when there was so much uncertainty about our lives. We wrote five songs that had bits we liked, but ultimately, they felt hollow. We’ve never been the type of band to just release music for the sake of it; we agonize over every detail.”
“So, we decided to scrap the whole thing and start over just before we finished the mixing stage. When you release music, you have to be proud of it not only as a piece of art on its own, but to support it on the road for however long. If you’re getting onstage every night playing music you don’t believe in, then you might as well just take a regular job somewhere.”

On the lead single, Mythic Love, you chose to work with Bria Salmena. What did they bring to the fold in terms of songwriting and recording?
“When we wrote Mythic Love, we knew it would work best as a duet. Kind of in the style of Lee Hazelwood and Nancy Sinatra. Bria is someone we’ve gotten to know through touring. There was a period from 2017-2019 where we always seemed to cross paths with Frigs on the road, and we ended up becoming really good friends. Bria’s voice is so unique and full of character; we thought she would be perfect for the duet. Because she lives in Toronto, we emailed her the track with a really crude example of what we wanted her to sing so she could record on top of it. When we got the recordings back, we were floored. She added so much to the song, it truly felt complete.”
Elsewhere Jason Disu and Jeff Tobias of Sunwatchers feature. Was it a challenge fitting brass and woodwind into your setup?
“It wasn’t a challenge because on Shadow on Everything and Stray we started integrating sax and trumpet. Jeff actually played on a couple tracks on Shadow. He’s another old friend of ours from back in Athens, Georgia. Jason was more of a challenge because we had never used Trombone before, and a lot of the sound we wanted out of it was from the limits of how far the instrument can be pushed. Luckily Jason is an amazing player and was able to nail it for us.”

You’ve also referenced the influence of Nan Goldin’s photography on your lyrics…
“Her photos in The Ballad of Sexual Dependency were a big influence to me while writing the lyrics. Their intimacy and wild energy really inspired me during lockdown, giving me a way to interact with the things I was missing about the city. It also inspired make one of the central characters of the record into a photographer, so that she could provide the same feeling to the songs.”
The intensity and theatre seem to have been ramped up on this mini-LP. Was that a conscious decision following Stray?
“I’m glad it feels like there is a lot of intensity in the songs. That is definitely something we always strive for.”
The guitar work has a dark, almost surf-noir vibe on Mythic Love. This has been a trademark of your career, are there any guitar players who influenced this?
“Rowland S Howard, Dick Dale, Link Wray, Blixa Bargeld, Duane Eddy, Chet Atkins (more in writing than playing). Yeah, I’d say you can expect more of this type of playing on the record, mainly in the melodic riffs in the songs!”
Image: Pooneh Ghana
What’s interesting about the guitar approach on this record in comparison to your previous work?
“To me the guitar work seems a little more sparse and melodic. Maybe a little more intentional. There are also a few moments where I use a way more distorted tone than I have in years, which serves the songs well, I think.”
Can you tell us about your main guitar and pedal setup, and how it was influenced or changed by recording Love On My Mind?
“Over the years, I’ve spent a lot of time simplifying my setup. I’ve gone from having three pedalboards routed through two amps and the house PA to just one small pedal chain through a fender deluxe. I realized that what I like most (at least for now) is the sound an electric guitar – a Jazzmaster currently – can make with just a little drive, delay, and reverb. I like to hear the sound of the strings and the wood and the way they naturally interact without too much in the way, masking or modifying the tone. I’m also a big fan of the whammy bar.”
Love Is On My Mind is out 25 February on Wharf Cat Records.
The post Bambara revel in the drama and uncertainty on new LP, Mythic Love appeared first on Guitar.com | All Things Guitar.