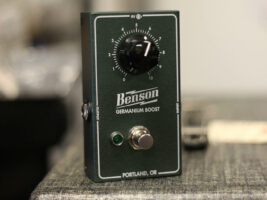 The new Germanium Boost, unlike Benson’s Germanium Fuzz, uses an error-correction circuit rather than temperature control to keep its NOS germanium transistor biased correctly. This allows it to sound consistent even when component drift and environmental temperature changes are taken into account.
Aside from the error correction, the pedal’s circuit incorporates a single NOS germanium transistor, as well as a class A buffer to increase the input impedance of the pedal and provide a transparent volume boost before the main boost circuit. The main gain stage adds a small amount of compression and EQ colour to the sound, for a characterful always-on enhancement or a dirty solo boost.
There’s a single volume control that adds and subtracts volume, depending on your gain-staging needs. Once powered, the pedal takes around 10 seconds to bias itself.
Designer Christopher Benson says of the pedal: “Our goal was that people could utilize the highly-regarded sound of the germanium transistor to colour their sound and boost their signal without worry that it would unpredictably ruin a gig or recording session.”
The pedal lists for $199, and is available at bensonamps.com.
The post Benson Amps unveils new self-biasing Germanium boost appeared first on Guitar.com | All Things Guitar.