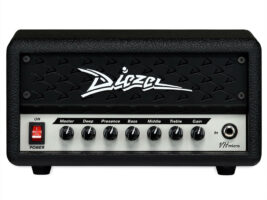 Diezel has introduced a space- and back-saving product for fans of its monolithic VH4 amplifier head – the VH Micro. It’s a smaller, lower-wattage version of the VH4 amp, still offering some searing high-gain rock and metal sounds.

READ MORE: Diezel confirms its new VHX head knows when it has been profiled

The VH Micro is rated at 30 watts of power, which is more than enough for reasonable stage volume, home practice and recording. Its voicing is inspired by VH4’s third channel, with controls for bass, middle, treble, gain and master volume. Also present are Deep and Presence controls, which adjust the overall tonal characteristics of the amplifier.
Diezel notes that the gain knob can range from “searing rock and metal tones” to “lush overdrive.” The amp’s back panel features an effects loop, which allows you to use delay and reverb effects without them being crushed by the preamp if you’re using a high-gain tone.
The amp also lives up to its Micro name, being only 9.5 inches (24 cm) wide, and 5.25 (13 cm) inches tall. It also weighs only 4lbs (1.8Kg), making it easy to transport to gigs or too and from the studio.
As well as being easier than the VH4 to carry, it’s also much easier to afford. The amp is available now with a recommended street price of $329.99, which is a fraction of the VH4’s $4,399 asking price.
Hear it in action with Sweetwater’s official demo below.