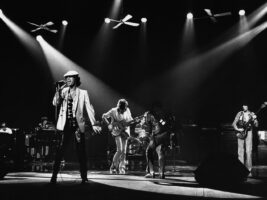 The Rolling Stones have released a previously unheard track Troubles A’ Comin, along with a new video. The song is being released as part of the 40th anniversary edition of their 1981 record Tattoo You.

READ MORE: The Rolling Stones reflect on the “huge loss” of Charlie Watts: “He was the rock the rest of it was built around”

The song is one of nine extras included on the expanded edition. The new version of the record is set to arrive on 22 October, including the extra songs on a Lost And Found: Rarities disc alongside the LP’s original 11.
Watch the new video for Troubles A’ Comin below.

Last week the band shared another preview of the album, with a new video for Living in the Heart of Love, which they dedicated to their late drummer Charlie Watts.
Watts, who performed with the band for 58 years, died on August 24, aged 80. Last week, The Rolling Stones’ first show of the year was dedicated to their bandmate. During the show, which kicked off the band’s No Filter US stadium tour, Mick Jagger addressed the crowd, saying: “It’s a bit of a poignant night for us because it’s the first tour we’ve done in 59 years without our lovely Charlie Watts.”
Mick Jagger also spoke to Rolling Stone about Watts’ importance to the group’s dynamic, saying: “He held the band together for so long, musically, because he was the rock the rest of it was built around.”
“The thing he brought was this beautiful sense of swing and swerve that most bands wish they could have,” Jagger said. “He was always there, always played beautifully and was always willing to discuss what to do about it – how he could make it better.”
The post Hear The Rolling Stones’ previously unreleased track Troubles A’ Comin appeared first on Guitar.com | All Things Guitar.