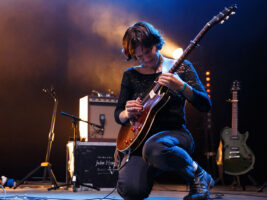 Big Thief have released a new song, Change, ahead of a 20-song double album set to be released in 2022.

READ MORE: “There’s a lack of preciousness that I think is precious”: Big Thief’s Buck Meek on the human connection in new LP Two Saviors

The new song comes alongside the same hand-drawn animated visualiser as their last two non-album singles, Little Things and Certainty. You can hear the new song below, and stream or purchase it through your platform of choice here.

The song has not been officially announced as part of an upcoming album, however in an interview with Mojo, the band announced that they plan to release a 20-track double LP next year. Guitarist and main songwriter Adrienne Lenker revealed the origins of the album’s length: “We accumulated so many songs that we loved, maybe about 50,” she said. “20 could be whittled down to 12, but not 50.”
Alongside the release of Change, the band have announced tour dates for April and May 2022, heading out across the US and Canada. Tickets go on sale tomorrow (8 October), at 10 AM local time. Take a look at the dates below.
April 2022
12 – Ithaca, NY, State Theatre
16 – Brooklyn, Ny, Kings Theatre
18 – Montreal, Que, L’olympia
19 – Toronto, ON, Massey Hall
21 – Washington, DC, The Anthem
22 – Cleveland, OH, Agora Ballroom
23 – Royal Oak, MI, Royal Oak Music Theatre
25 – Chicago, IL, Riviera Theatre
26 – Milwaukee, IL, The Pabst Theater
27 – St. Paul, MN, Palace Theatre
29 – Denver, CO, Ogden Theatre
30 – Salt Lake City, UT, Metro Music Hall
May 2022
2 – Seattle, WA, Paramount Theatre
3 – Portland, OR, Roseland Theater
4 – Portland, OR, Roseland Theater
7 – Oakland, CA, Fox Theatre
10 – Los Angeles, CA Wiltern Theatre
11 – Los Angeles, CA, Wiltern Theatre
12 – San Diego, CA, Observatory North Park