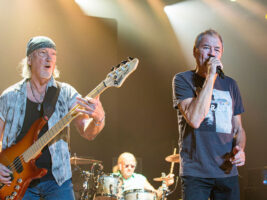 Deep Purple have announced that their 22nd studio album will be called Turning To Crime, and will be a covers album of tracks by Love, Fleetwood Mac, Bob Dylan and more.

READ MORE: Deep Purple are teasing what could be the band’s next studio album

Turning To Crime will be released on 26 November this year. Its announcement follows the band starting a website, turningtocrime.com, that featured mugshots of Ian Paice, Steven Morse, Ian Gillan, Don Airey and Roger Glover.
Ahead of the album’s release, the band have dropped the opening track, a cover of the Love track 7 And 7 Is. Take a listen below:

Alongside this, the band have also released a short teaser trailer for a documentary about the making of the album. Entitled Locked Up: The Making Of Turning to Crime, it will look at how the band went about recording the album remotely, thanks to the global pandemic that made traditional recording a lot harder. Take a look below.

The album follows 2020’s Whoosh!, which was also affected by the pandemic. While it was recorded in person, it was announced in March of last year, which you remember was the month when everything went a little mad. Hence, its release was pushed back to August of that year.
In a 6/10 review, Guitar.com said Whoosh! is a showcase of the “eye-catching guitar playing that characterised Purple’s last two records, but lyrically a low point in the band’s illustrious history.”
Turning To Crime’s full tracklist is below.
1. “7 and 7 Is” (Love)
2. “Rockin’ Pneumonia and the Boogie Woogie Flu” (Huey “Piano” Smith)
3. “Oh Well” (Fleetwood Mac)
4. “Jenny Take A Ride!” (Mitch Ryder & The Detroit Wheels)
5. “Watching the River Flow” (Bob Dylan)
6. “Let the Good Times Roll” (Ray Charles & Quincy Jones)
7. “Dixie Chicken” (Little Feat)
8. “Shapes of Things” (Yardbirds)
9. “The Battle of New Orleans” (Lonnie Donegan/Johnny Horton)
10. “Lucifer” (Bob Seger System)
11. “White Room” (Cream)
12. “Caught in the Act” (Medley: “Going Down” /”Green Onions” / “Hot ‘Lanta” /”Dazed and Confused” / “Gimme Some Lovin’” )
The post Deep Purple are Turning To Crime on new record, featuring covers of Fleetwood Mac, Bob Dylan and more appeared first on Guitar.com | All Things Guitar.