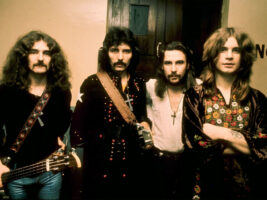 Original Black Sabbath drummer Bill Ward has spoken about the possibility of getting the band’s founding lineup back together to record the follow up to 2013’s 13.

Black Sabbath reunited in 2011, however Ward soon left the reunited lineup. The fallout from his departure involved some publicly strained relationships between Ward and the rest of Sabbath. Ward posted a statement calling the contract for the tour and album “unreasonable”, while frontman Ozzy Osbourne responded in a statement of his own, alleging Ward “knew [he] wasn’t capable of doing the album and a 16-month tour” due to his health.
Speaking to the Metro, ostensibly about Technical Ecstacy’s reissue, Ward revealed that his relationship with the rest of the founding Sabbath lineup (Osbourne, guitarist Tony Iommi, and bassist Geezer Butler) is no longer as strained: “I’m in contact with the guys. I talked to Ozzy two nights ago,” he said.
“A lot of things have crossed between us and there’s new boundaries that I’ve had to build, but I don’t think any less of them. I’ve been working with Tony since 1964 when I was 16 years old. They’re my brothers and I love them.”
He enthused about the idea of another studio record, saying: “As far as I’m concerned, the book’s never closed with Sabbath! I’m writing like a demon, I’m living life… My biggest contention has been ‘let’s make another album’. Nothing live necessarily, because I’m looking at what I can realistically do. The way I play the drums, it’s becoming tougher as I get older.
“I haven’t spoken to the guys about it, but I have talked to a couple of people in management about the possibility of making a recording. Which I can do safely, even with Covid around. I can lay tracks at my studio in Los Angeles. I’m very open-minded about doing something like that.”
While Ward didn’t reveal that any plans had been set in stone, a final album from the four would bookend the band’s tumultuous lineup history.
Black Sabbath’s final performance was at the NEC in Birmingham, with drummer Tommy Clufatos filling in for Ward.
The post Bill Ward wants to make another album with Black Sabbath’s founding lineup appeared first on Guitar.com | All Things Guitar.