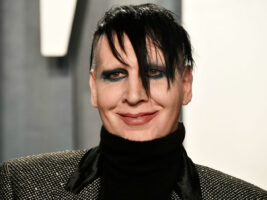 A US District Court judge has denied a request from Marilyn Manson’s lawyers to dismiss a suit filed against him by actress Esmé Bianco. The suit was filed in April of this year, and alleges that Manson physically and emotionally abused Bianco, and raped her in 2011. Manson, real name Brian Warner, must now file a formal answer to each claim within 14 days.
According to Deadline, the judge wrote: “a reasonable jury could find that the effects of Warner’s alleged unconscionable acts, including the perceived threat to Plaintiff’s safety, immigration status, and career, persisted years after her last contact with Warner.”
“My hope is that this ruling empowers other survivors to pursue justice for themselves while signalling to abusers that they cannot bully victims into silence,” Bianco said in a statement about the ruling.
Manson’s lawyer Howard E King said the singer would “vigorously contest these allegations in court.” He added: “To be clear, this suit was only filed after my client refused to be shaken down by Ms Bianco and her lawyer and give in to their outrageous financial demands based on conduct that simply never occurred.”
In February of this year, actress Evan Rachel Wood named Manson as her abuser. At the same time, four other women shared statements alleging abuse. Manson was dropped by his record label and management, and had planned roles in several TV shows cancelled.
He now faces four lawsuits in total: a case filed by an anonymous accuser (identified as Jane Doe) accusing Manson of rape and death threats, a case filed by actress Ashley Morgan Smithline accusing him singer of sexual assault, sexual battery, intentional infliction of emotional distress, human trafficking, and unlawful imprisonment, and a case filed by Manson’s former assistant Ashley Walters claiming that he subjected her to “personal and professional sexual exploitation, manipulation and psychological abuse.”
Recently, Doe’s suit was dismissed by a judge on the grounds it was not detailed enough, however was later refiled with additional information surrounding her accusations.
The post Esmé Bianco’s lawsuit against Marilyn Manson, alleging sexual and physical abuse, to proceed appeared first on Guitar.com | All Things Guitar.