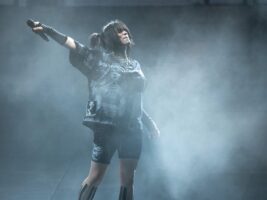 Billie Eilish to those who call her music ‘depressing’: “Have you listened to the Beatles?”

Billie Eilish has addressed those who think her music is ‘depressing’ saying it’s not dissimilar to the woeful tunes written by the Beatles.

Eilish was speaking in an episode of the upcoming Origins, the Audible series which explores the beginnings of artists from Doja Cat to King Princess to Flying Lotus. The entire season is due out next month (17 November).
In the discussion, Eilish looked back on her career thus far, and addressed listeners who have called her music overly “sad and dark”.
“It was so weird to me when I was first coming up and, and the thing everybody said was, like, ‘Billie Eilish’s music is so depressing, and it’s so sad, and it’s too dark,’” she admits (as reported by Rolling Stone).
“I was like, ‘What are you talking about? Have you listened to the Beatles and While My Guitar Gently Weeps and Yesterday, and Lana Del Rey? Like, what the hell?’”
“It was so surprising to me that people thought anything I was creating was dark. I mean, it’s real.”
Origins will be released later this year as part of Audible’s long-standing Words + Music series. Previously, the series has featured numerous musicians, spanning from all different genres. These have included names such as Alanis Morissette, Eddie Vedder, Beck and John Legend.
Earlier this year, Billie Eilish also opened up about her difficulty recording new music in studio settings. Admitting that the whole experience provokes a sense of unease for her, the artist told Apple Music’s Zane Lowe, “I don’t like studios, I don’t like sessions […] I don’t know, it freaks me out. It truly gives me social anxiety.”
The post Billie Eilish to those who call her music ‘depressing’: “Have you listened to the Beatles?” appeared first on Guitar.com | All Things Guitar.