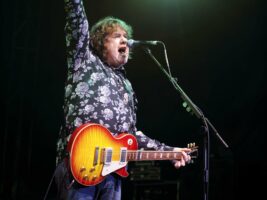 The extensive guitar and gear collection of blues-rock guitar hero, Gary Moore, is up for auction for the third time since his passing in 2011.

READ MORE: Noel Gallagher’s damaged Gibson from the night Oasis split is going up for auction.

Much of the guitarist’s gear was auctioned off in two previous auctions, but London auction house Bonhams has since announced that there will be a third sale of Moore’s extensive collection.
Named the Gary Moore Collection Part III, the auction will feature some of Moore’s most adored guitars, such as a 1988 Jackson USA Strat Custom Guitar painted with the flags of the world, the Heritage Gary Moore signature model with a Les-Paul style mahogany body, as well as a selection of Gibson Les Paul guitars such as the 2007 Les Paul Standard Gold Top.
The collection features 17 different guitars from Moore’s personal arsenal, as well as a series of amplifiers and pedals, such as a Marshall 1960BX Cabinet a Marshall Super Bass 100 Watt Amp Head, and a rare Cornell Fuzz Face reissue pedal.
This collection sits within a larger collection named Rock, Pop & Film Online, which features a large range of items, from a series of Annie Lennox silver and gold discs, a Bee Gees South Africa tour jacket, and a Squier Bullet Stratocaster signed by all members of the Red Hot Chili Peppers.
Another item seen in the larger collection, is Eddie Van Halen’s Ernie Ball Music Man Edward Van Halen model Electric Guitar, which is expected to pick up between £7,000 to £9,000, as well as The Cure’s Porl Thompson’s Fender Stratocaster which expected to sell at between £10,000 to £12,000.
The collection is now open for bidding online and will close on 4 May.
For more details and the full catalog, visit Bonhams.com.
The post Blues rock legend Gary Moore’s guitar collection is up for auction for the third time appeared first on Guitar.com | All Things Guitar.