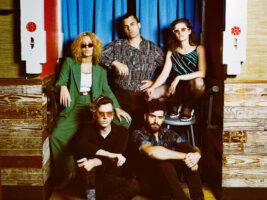 Bodega – Broken Equipment review: The band expand their palette in this thrilling musical tour of New York and its history

You won’t hear many records this year that sound more like the place they were created than the second full-length from New York art-rock collective Bodega. The follow-up to 2018 debut Endless Scroll may have been informed by Ben Hozie and Nikki Belfiglio’s voracious appetite for the work of philosophers from other parts of the globe but it couldn’t have been fashioned anywhere other than the Big Apple.

READ MORE: The Genius Of… Without You I’m Nothing by Placebo

Listening to these 12 tracks feels a little like archaeology, scraping away the soil to reveal stacked historical artefacts from one of the world’s great musical cities. The blitzkrieg punk charge of Ramones, the disco pulse of the city’s revolutionary early 1980s club scene, the hip-hop fury of Beastie Boys and Run-DMC, as well as the garage-rock revival led by The Strokes and Yeah Yeah Yeahs, LCD Soundsystem’s dancefloor explorations and contemporary post-punkers Parquet Courts.

Somehow, Bodega distil all those disparate influences into a signature sound that never quite feels like imitation.
As on the band’s first album, there’s an ever-present layer of self-aware satire in Hozie and Belfiglio’s musings on modern life. Bassist/philosophy professor Adam See provides a relentless thrum, while Hozie and lead guitarist Dan Ryan’s scruffy, frenetic riffing betrays their ample musical chops.
When the album opens with the clanging bass groove of Thrown, punctuated by cowbell strikes, jagged overdriven slashes and a pin-sharp lyrical cascade, there’s a sense of Bodega picking up where they left off with 2019’s Shiny New Model EP. However, with a four-count of Tai Lee’s drumsticks, we’re catapulted headlong into the New Yorkers’ finest moment yet, the album’s lead single Doers.

A finely honed indie-club classic in the making, the song is a commentary on the commercialisation of self-help language and a toxic culture of ceaseless productivity. Hozie, always happy to remind us how well read he is, name-drops Hemingway then paraphrases Daft Punk as he bemoans a generation left “bitter, harder, fatter, stressed out”. Kudos if you can listen to it five times without finding yourself muttering “10 minutes Bandcamp, 10 minutes Wiki browse, 10 minutes planning my next 10 minutes…” for the rest of the day. It’s an incendiary, inspired and quite brilliant single.
Belfiglio assumes vocal duties on third track Territorial Call of the Female, with shades of Kathleen Hanna on Le Tigre’s Hot Topic, before NYC (Disambiguation) nods simultaneously to both James Murphy and Interpol. An echoey chorus-washed riff emerges from lusty feedback, and Hozie chants “New York was founded by a corporation” as he traces the Big Apple’s murky history, from the persecution of Native Americans to market crashes and rampant gentrification.
Image: Pooneh Ghana
While Bodega’s influences are abundantly, unapologetically on show here, Broken Equipment is more varied than the band’s debut. There’s a raw punk spirit present on Statuette on the Console and How Can I Help Ya?. Belfiglio recorded versions of the former (written from God’s perspective, no less) in eight languages, and a one-note riff jabs away restlessly beneath the vocalist’s admission that “I never knew just how to give control”.
The latter song, shaped from coarse powerchords and fidgety riffing, is a playful romp indebted to Ramones, in which Hozie appears sick of being the protagonist in his own life, as he laments, “The employees of my ego they’re on strike / Brothers and sisters you know what it’s like”.
Image: Pooneh Ghana
Meanwhile, Pillar on the Bridge of You is the first love song Hozie has written for his partner Belfiglio, its hazy modulated guitars born of the 80s. “I want to be a pillar in the bridge of you / Salty waves slap against me / Creation trails down to my chin / Sea changes with ecstasy,” he sings devotedly.
The devotion to Bodega’s musical predecessors is perhaps most overt on All Past Lovers. Slipping into a motorik rhythm, it stirs warm memories of The Strokes’ Modern Age EP erupting out of Manhattan in 2001, most potently when it topples over into a wantonly ragged solo that’ll leave you pondering just how that was 21 years ago.

Finale After Jane showcases a less self-conscious, more contemplative side to Bodega. It’s a brutally honest conversation between Hozie and his late mother, depicted in her death throes no longer able to recognise her son. Gently strumming an acoustic guitar and joined by softly struck drums and an EBow ensemble, Hozie’s earnest conclusion is “I’m channelling your heart when I sing my songs”.
And there are some great songs on Broken Equipment, none stronger than the album’s opening pair. While the 10 tracks that follow don’t always scale the same heights, there’s enough evidence here of a band expanding their horizons. Bodega’s second album points the way not just to where they’re from but where they’re heading.
Broken Equipment is out now.
The post Bodega – Broken Equipment review: The band expand their palette in this thrilling musical tour of New York and its history appeared first on Guitar.com | All Things Guitar.