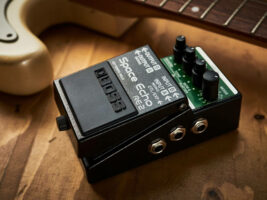 Following on from some rumours and accidental early listings on Ebay, Boss today (18 February) updated its website with the news that the RE-2 Space Echo would be coming soon.
“It has been nearly 50 years since the inception of the original Roland Space Echo, and 15 years since the Boss RE-20 was released,” the brand wrote.
“We’re pleased to announce the Boss RE-2 Space Echo Compact Pedal. Combining newly recreated authentic Space Echo sounds, meticulously crafted and delivered in a legendary Boss Compact Pedal form factor.”
An early photo of the pedal shows familiar controls (making use of concentric knobs for space-saving), as well as stereo ins and outs and an external input for an expression pedal or control footswitch.
The original Roland Space Echo RE-201 was a large tape delay unit, first introduced in 1974. It was later condensed down to the digital RE-20 guitar pedal, with two footswitches – around twice the size of the upcoming RE-2.
You can sign up to know more about the RE-2 over at boss.info.
The post Boss officially confirms the RE-2 Space Echo appeared first on Guitar.com | All Things Guitar.