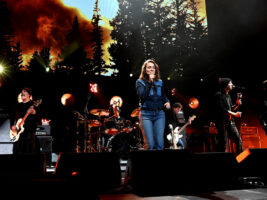 Speaking to Rolling Stone, Carlile explained how she’s “inextricably linked to Soundgarden for life,” and that she “would make the time” to tour as Soundgarden’s singer, if offered the opportunity. “I am such a Chris Cornell fan, I loved him so much. I was so devastated when he left us,” she continued.
While Soundgarden representatives did not confirm to Rolling Stone whether Carlile touring with the band was on the cards, Soundgarden members have stated that they would like the band to continue following Cornell’s death in 2017.
Drummer Matt Cameron told Rolling Stone in 2020: “I think most people assume the three of us [are] over and done with since Chris passed away,” he said, “but that’s not the case. It’s nice to know that people still want to hear us play together.”
Carlile and Soundgarden first collaborated in 2019, at the all-star tribute to Chris Cornell. They went on to record a Record Store Day single A Rooster Says, released in September 2020. It featured the tracks Black Hole Sun and Searching With My Good Eye Closed, which Carlile and Soundgarden performed live in August of this year.
You can check out the performance of Black Hole Sun below.

The post Brandi Carlile wants to sing for Soundgarden appeared first on Guitar.com | All Things Guitar.