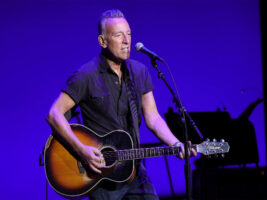 Bruce Springsteen has announced he will release a brand new album, Only The Strong Survive, which is set to be a collection of “15 soul music greats”.

In an announcement video shared earlier today (29 September) Springsteen stated, “I wanted to make an album where I just sang, and what better music to work with than the great American songbook of the Sixties and Seventies?”
He continued, “I’ve taken my inspiration from Levi Stubbs, David Ruffin, Jimmy Ruffin, the Iceman Jerry Butler, Diana Ross, Dobie Gray and Scott Walker, among many others. I’ve tried to do justice to them all — and to the fabulous writers of this glorious music.”
You can watch the video below:

Alongside the announcement, the Dancing In The Dark singer dropped a cover of Frank Wilson’s Do I Love You (Indeed I Do) accompanied by an official video, which you can also watch here:

The full track list for Only The Strong Survive is as follows:

Only the Strong Survive
Soul Days (feat. Sam Moore)
Nightshift
Do I Love You (Indeed I Do)
The Sun Ain’t Gonna Shine Anymore
Turn Back the Hands of Time
When She Was My Girl
Hey, Western Union Man
I Wish It Would Rain
Don’t Play That Song
Any Other Way
I Forgot to Be Your Lover (feat. Sam Moore)
7 Rooms of Gloom
What Becomes of the Brokenhearted
Someday We’ll Be Together

Springsteen joined Paul McCartney and Dave Grohl at the UK’s Glastonbury Festival back in June where he performed his 1985 single Glory Days and the Fab Four’s I Wanna Be Your Man.
The album is set for release on 11 November. Springsteen embarks on a tour in February 2023, you can view the full list of dates and get tickets at brucespringsteen.net.
The post Bruce Springsteen announces new album, a collection of “15 soul music greats” appeared first on Guitar.com | All Things Guitar.