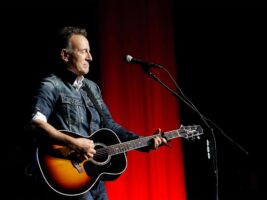 Bruce Springsteen has reportedly sold his music catalogue to Sony for $500 million, giving the music giant ownership over platinum-winning albums such as Born In the USA and Nebraska.

No official announcement has yet been made about the deal, which was reported to have closed just weeks ago, according to the New York Times. Sony gains the publishing rights and masters to over 300 songs, 20 studio albums, 7 EPs, 23 live albums and more.
Over his five-decade-long career, Springsteen has released his music through Sony’s Columbia Records imprint. Somewhere in the late 80s to 90s, he was given ownership of his early records to encourage him to re-sign with the label.
Billboard reports that Springsteen was negotiating the sale of his music catalogue to Sony last month, as well as shopping around his publishing catalogue, which was under Universal Music Publishing Group.
The deal could be the most expensive to date between a label and a single artist. Bob Dylan sold just his publishing rights to Universal Music Publishing Group last year for over $300 million.
Springsteen’s latest studio album was 2020’s Letter To You, which he was unable to tour due to COVID-19. Instead, the album was instead promoted with an online radio station, music videos and a custom emoji for Twitter
The post Bruce Springsteen reportedly sells his recorded music catalogue to Sony for $500 million appeared first on Guitar.com | All Things Guitar.