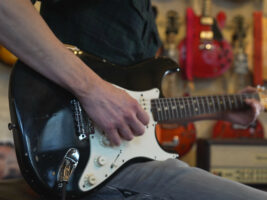 The YouTube channel CGS has responded after the organiser of Paul Davids’ controversial Hendrix Monterey Stratocaster video claimed that other YouTube channels created “damaging videos of hashed together content,” in the wake of the video, in an attempt to unscrupulously gain viewership and revenue.

READ MORE: Media influencer behind Paul Davids’ controversial Hendrix Stratocaster video responds: “We are completely satisfied with the provenance of the guitar”

Back in December 2021, Paul Davids posted a YouTube video entitled I PLAYED JIMI HENDRIX’ $10,000,000 GUITAR, the guitar in question being the one Hendrix played at Monterey Pop Festival. After the video was published, Guitar.com reported that the instrument was pulled from sale at Heritage Auctions in 2017, apparently due to provenance issues, and noted that the guitar in Davids’ video appeared to have some visual differences to the guitar in footage of Monterey.
More recently, Guitar.com published a statement from Myles Poulton, who organised the video. The statement responded in part to Guitar.com’s coverage and to some of the YouTube videos made following the articles and Davids’ video. Poulton’s statement accused a group of YouTube channels of trying to “up their viewing and income” off the back of Davids’ video.
Mike, who runs the channel CGS on YouTube (he also goes by China Guitar Sceptic online), shared a statement of his own response to Guitar.com’s publication of Poulton’s comment on the matter. CGS has published a number of videos covering the guitar and Davids’ video.
Poulton’s statement did not name CGS directly. It did, however, refer to a “representative from a small YouTube Guitar Channel specialising in faking guitars,” whom he agreed to take a call from. Guitar.com’s initial article inserted a clarification that the channel in question here was CGS. This clarification was later removed, as it was not completely certain that Poulton was specifically referring to CGS. Poulton did not confirm which channel in particular he was referring to when asked by Guitar.com.
However, CGS does cover fake guitars, and did make several videos in response to Davids’. Mike and Poulton did speak on the phone, as Mike recounted in a video on the CGS channel. Therefore it is likely that Poulton was referring to CGS in this part of his statement.
Mike’s full statement is below.
“Firstly and most importantly I would like to state the main reason for putting out the video questioning the alleged Monterey Strat shown on Paul Davids’ YouTube channel was to protect Paul. It was simply because there are clear physical discrepancies between that guitar and the Monterey guitar played by Jimi Hendrix. I did not want my friend Paul to be caught up or implicated later if that guitar sold for $10,000,000 and was found not to be the Monterey.
“Originally as the China Guitar Sceptic (now just CGS) I spent several years on YouTube giving people the honest low down on counterfeit guitars from China and elsewhere, reporting on the good, bad and so often ugly truths about them. I have always been fiercely against fake guitars as I believe that they leave people open to being conned when unscrupulous people pass them off as real.
“In Mr Poulton’s piece I was accused of ‘specialising in faking guitars’, but that could not be further from the truth, as he would have known had he taken just a little time to watch any of my content.
“Further he suggested that my video about the alleged Monterey Strat was hashed together in order to gain views and for financial gain. Once again, had he taken even a small amount of time to check he would have seen that I regularly produce content about fake guitars and exposing them. He would also note that the channel has around 11 million views and I have never been one to exploit anything for views or money. I only do YouTube for my amazing community.
“Let’s talk about the ‘hashed together content casting doubt on the instrument.’ I made some very clear comparisons between their guitar and the Monterey Strat and the physical discrepancies therein. I simply asked a series of questions that any sensible buyer might ask before purchasing the guitar. Provenance is certainly a major part of the value of any famous guitar, but only if that guitar also matches the characteristics of the alleged guitar it is purported to be.
“The questions I asked were: Why have markings on the back of the alleged Monterey guitar healed themselves, while there is a great deal of evidence of right-handed playing?
“Why have clear marks from photographic evidence on the front of the Monterey guitar also disappeared from the alleged guitar?
“Why is there photographic evidence of the patent numbers and synchronised tremolo on the Monterey headstock, while the guitar in question has a hard-tail neck?
“Why does their guitar have an ‘F’ plate logo on the neck plate when the Monterey had just the serial (likely beginning with an ‘L’)?
“Why does the serial number 159751 indicate that this would be a 1967 CBS era large headstock Strat?
“Why is the strap button on the alleged guitar perpendicular to the body when in all photos of Jimi with the Monterey strat it is clearly angled downwards?
“As for hounding Mr Poulton and Paul Davids, that is utter nonsense. Mr Poulton asked me to call him in an email, providing his telephone number. I also invited him on to my channel to answer any of the questions I had raised about their guitar.
“Paul Davids was just very keen to distance himself from any of the fallout when we had a polite chat about it over messenger.
“As a result of the article trying to trash my reputation, my original video is now up again and I have made another clarifying Mr Poulton’s errors of judgement about me and my motives. I would also like to see Paul Davids reciprocate my friendship and chip in soon, over this public trashing of my reputation.”
The post CGS responds to Myles Poulton’s statement regarding Paul Davids’ Hendrix Stratocaster video appeared first on Guitar.com | All Things Guitar.