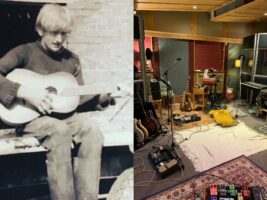 Charles Ward, co-founder of legendary Rockfield Studios, has passed away

Charles Ward, co-founder of legendary residential recording studio Rockfield Studios and founder of Monnow Valley Studios, has passed away.
Charles’ passing was confirmed by Rockfield Studios’ social media, which indicated the co-founder passed away on 27 July.
The studio also shared several pictures of Charles, accompanied by the caption, “To us, these photos sum the brothers up perfectly – wellies, guitars and recording! RIP Charles…. ‘It’s rock ‘n’ roll man’.”
Charles founded Rockfield Studios in 1963 with brother Kingsley, converting a farmhouse on their family’s farm after their request to record in EMI in London in the 1960s was rejected by ‘fifth Beatle’ George Martin.
The duo gave birth to the concept of a residential studio where bands could stay at and focus on their music following further improvements and renovations in 1965.
Since then, Rockfield Studios has played host to some of the biggest music names throughout several eras.

It is with great sadness that we have to announce that Charles Ward, Kingsley’s brother and co-founder of Rockfield…
Posted by Rockfield Studios on Wednesday, July 27, 2022

Black Sabbath, Tom Cochrane, Iggy Pop, Sepultura, Manic Street Preachers, Coldplay and Royal Blood are only a few of the prominent artists that have been recorded at Rockfield Studios, which was also where Queen’s Bohemian Rhapsody was recorded.
Ozzy Osbourne has paid tribute to Rockfield’s role in allowing Black Sabbath to develop the sound that would eventually come to be known as heavy metal, telling BBC, “We were very loud and Rockfield allowed us the freedom because no one would allow us to play as loud as that. The roof tiles were rattling.”
“We didn’t think, ‘let’s invent heavy metal’, it just happened. Rockfield will always be a part of me. I can go and live in Beverly Hills but for some reason I end up back in Rockfield. It’s just magic.”
Charles founded Monnow Valley Studios after departing Rockfield Studios in the 1980s. The former Rockfield Studio rehearsal facility has since hosted Osbourne, Iggy Pop, Manic Street Preachers, Oasis, Funeral For A Friend and more, with Oasis famously using a picture of the studio’s interior as the artwork for their 1994 single Supersonic.
The post Charles Ward, co-founder of legendary Rockfield Studios, has passed away appeared first on Guitar.com | All Things Guitar.