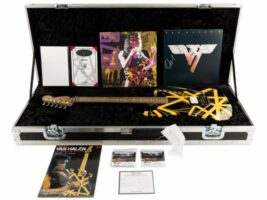 A trio of Charvel EVH Art Series guitars have hit the auction block, with each certified to be both signed and played on stage by Eddie Van Halen himself.

Hosted by Heritage Auctions, four Eddie Van Halen Charvels have been listed for sale, with three of which being confirmed to have been played on stage and autographed by the man himself.
The signed trio, which are all part of Charvel’s EVH Art Series, all follow the same premise in their designs: a familiar Strat-style body, Floyd Rose tremolo, maple neck and a single bridge-position humbucker.
Each coming with its own certificate of authenticity, the guitars are been confirmed to have been played by Van Halen at a selection of his shows during 2007 – with images of the guitarist wielding them on stage coming included in the sale.
Image: Heritage Auctions
The first of which is the classic red, white and black model, which is signed by the guitarist and was played on stage on 18 October, during a performance in Chicago, Illinois. The second, a white and black design, was used by Van Halen shortly after, appearing at a performance in Washington DC on 1 November.
Image: Heritage Auctions
Finally, the axe bearing the reverse-Bumblebee design was used onstage during a performance on 3 December in Seattle, Washington. Coming with setlists from the event, this model is arguable the rarest of the guitars on auction, with a model in this colourway previously selling for over $46,000.
Image: Heritage Auctions
Alongside the three signed guitars, a replica of the artist’s distinctive Bumblebee axe is also listed in the auction – crafted by Master Builder Chip Ellis in 2019.
The only one of the guitars to remain in unplayed condition, the model will come with a Van Halen Live Tour In Japan 1978 and 1979 book, a signed album and a 1979 booklet that explores the history of the original model.
Image: Heritage Auctions
Currently, all four models have an opening bid of $10,000. The auction is due to end on 13 October. Find out more about the auction on Heritage Auction’s website.
The post Charvel guitars signed by Eddie Van Halen up for auction, alongside Masterbuilt Bumblebee replica appeared first on Guitar.com | All Things Guitar.