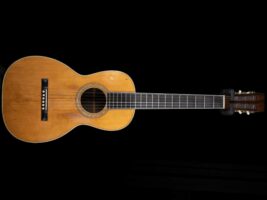 A New Zealand resident has recently found out that an old acoustic guitar that was gathering dust in her home is actually a Martin that dates back 150 years – and is now auctioning it off to help fund treatment for her terminally ill daughter.

New Zealand resident, Margaret Simpson recently came to the realisation that the acoustic guitar that she purchased in the 1960s is worth much more than first expected – discovering that it is actually a rare Martin that dates back to 1870.
After questioning the value of the instrument, which remained relatively untouched over the past few years, the eighty-five-year-old contacted a local retailer to work out how much she could sell the guitar for. It was here that it was revealed that the guitar was in fact an incredibly historic model: a Size 2 Martin, Style 34 that was first manufactured in the 1870s.
Estimated to be worth around $15,000 (NZ $25,000), the guitar is not only marked as rare due to its prolific age, but the value is also increased as a result of its ebony bridge, which is unlike other 34-style models that most-commonly sport an ivory bridge.
Simpson has since placed the 150-year-old Martin up for auction and plans to donate all of the profits towards funding her daughter’s cancer treatment.
Her daughter, Jo Simpson is 51 and is currently undergoing chemotherapy that costs approximately $5,000 NZ monthly. Having to fund the treatment themselves, Margaret hopes that the money raised by the auction will stabilise her daughter’s condition and allow her to spend more time with her young children.
The auction is due to end on 3 November and further information on the guitar can be found at Studio 1 Vintage Guitars. Donations for Jo Simpson’s cancer treatment can be made via the Give A Little page.
The post New Zealand woman discovers her neglected acoustic guitar is actually incredibly valuable Martin from 1870 appeared first on Guitar.com | All Things Guitar.