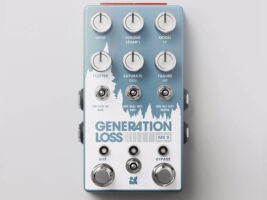 The ever-exploratory Chase Bliss Audio has opened pre-orders for the Generation Loss MKII, using to good advantage its merging with Cooper FX to introduce the next iteration of the immensely successful VHS tone degradation pedal.

READ MORE: The Big Review: Chase Bliss Habit Echo Collector – Is this the most creatively glitchy delay pedal ever?

Dubbed a VHS Duplicator effect, Generation Loss MKII offers a highly authentic and musical take on magnetic tape timbre and behaviours – and for those wondering, it isn’t a simple reskin of the now-discontinued Generation Loss V2.
“We decided to start from scratch this time and really explore what tape is all about,” wrote a product description. “We took apart VCRs, we analysed anything we could find with a tape in it, from camcorders to cassette decks.”
The result, according to Chase Bliss, is a pedal that offers “the most accurate real-time tape simulator we could manage” with extremely low amounts of latency and stereo outputs.
Included are over 10 tape models, including VCR, Camcorder and Cassette, along with the controls to fine-tune these to your musical needs.
Some parameters include Wow for classic tape-style wobble; Saturation for introducing analogue saturation; Flutter for quick, twitchy and random modulation of pitch and amplitude, and Failure, which recreates the mechanical malfunctions found in tape machines – crimps, drops and more – for a “living” feel.
Dry and Noise switches let you make broad adjustments to the dry-wet balance and mechanical noise levels, respectively.
Meanwhile Aux lets you choose from three dramatic performance effects engaged by foot switch, including a tape-stop effect; a momentary wet-bypass, and one that brings the virtual tape machine tumbling to destruction.
The new Generation Loss MKII also comes with panels of dip switches for in-depth customisation of the effect’s behaviour.
These secondary functions are plenty interesting, for example, the Spread switch reads the Failure knob to create a “malfunctioning stereo image” and Dry Tape lets you apply the pedal’s effects – except Wow and Flutter – to your dry signal, giving you “saturated, malfunctioning chorus effects.”

And there are hidden controls as well, which let you adjust mechanical noise levels; volumes of crinkles and pops from the Failure knob; the amount of hiss in Flutter, and more.
And if you prefer the original, a flick of a switch reverts it to the Cooper FX classic, in stereo this time, with all the old parameters available.
Here’s a little preview of Generation Loss MKII:

The Chase Bliss Audio Generation Loss MKII, priced at $399, is expected to ship between late September to early November.
The pedal will be sold under Chase Bliss’ new direct-to-customer model, which shifts the sale of all pedals from physical stores to a sole web store (except in Japan).
Joel Korte, owner of Chase Bliss, explained in May that the company was making the change in order to prevent the prices of its products from being further raised.
The shift to a direct-to-consumer model is also said to provide greater benefits to customers: pedals and repairs will be more readily available to both US and international customers; in-house customer support will be expanded, and a 30-day “no hassle” return policy will be implemented.
Learn more about Generation Loss MKII at chasebliss.com
The post Chase Bliss Audio announces the Generation Loss MKII VHS Duplicator, available for pre-order now appeared first on Guitar.com | All Things Guitar.