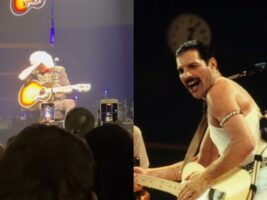 Watch: Brian May sheds a tear after performing alongside Freddie Mercury’s hologram

Queen‘s Brian May was filmed shedding a tear after a performance of the ballad Love Of My Life alongside an optical illusion of late singer Freddie Mercury at a concert at London’s O2 Arena.

Queen has been performing with the ‘hologram’ for their Rhapsody tour with singer Adam Lambert, with May joining the hologram for a duet. In the now-viral moment captured by TikTok user @impsk77, May can be seen playing the final notes of Love Of My Life. bowing and applauding the ‘hologram’ of Mercury before wiping away a tear.
The ‘hologram’, which functions as an optical illusion of Mercury projected on the same stage as May on an on-stage screen, was made using archive footage of Mercury performing at Queen’s 1986 Wembley concert and first made its debut in 2012 at the 10th anniversary of the We Will Rock You musical.
Watch @impsk77’s video below.

May has paid tribute to Mercury on multiple occasions, recently reflecting on the singer’s fantastical lyricism as Mercury’s way of deeply expressing his feelings.
“In the beginning, a lot of his writing was very fantastical, but underneath, I think he was really pouring his heart out,” May said. “Freddie was struggling with various things at various times, and we all know that his sexuality was quite fluid.”
“It was hard for him to express. And I think you can hear him in this song, struggling with his relationships, putting them into words and music.”
May previously discussed how he and drummer Roger Taylor dealt with the aftermath of Mercury’s death in 1991 following his battle with AIDS. He explained, “I think Roger and I both went through a kind of normal grieving process, but [it was] accentuated by the fact it has to be public. We sort of went into denial. Like, ‘Yeah well, we did Queen, but we do something else now’.
Roger and I plunged into our solo work and didn’t want to talk about Queen. That seems almost nonsensical because we spent half of our lives constructing Queen. But we didn’t want to know at that time. It was a grieving thing. We just overcompensated. It went on for a long time.”
The post Watch: Brian May sheds a tear after performing alongside Freddie Mercury’s hologram appeared first on Guitar.com | All Things Guitar.