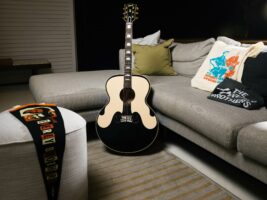 READ MORE: Gibson teases “experimental” Moderne prototype is in the works, after being spotted onstage with Metallica’s Kirk Hammett

Gibson will release the limited-edition Everly Brothers SJ-200 acoustic guitar and the Everly Brothers x Gibson capsule apparel on 14 June to kick off a month-long celebration of the brothers’ musical legacy. The Everly Brothers SJ-200 acoustic is handmade by Gibson’s luthiers and artisans at the Gibson Acoustic Custom Shop in Bozeman, Montana and comes with a AA flame maple back and sides with a thermally aged Sitka spruce top.
The guitar is also furnished with The Everly Brothers’ signature dual pickguards along with an Ebony finish. Classic mother-of-pearl graduated crown inlays have been added to a rosewood fretboard paired with a Moustache bridge with four-bar mother-of-pearl inlays.
The SJ-200’s bridge saddle, nut and bridge pins are bone, and is equipped with Gold Grover Rotomatic tuners.