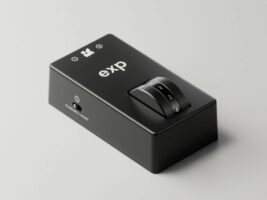 Chase Bliss, the creator of intricate effects pedals with parameters aplenty, has brought back its novel expression pedal for controlling those parameters with the Exp.

READ MORE: The Big Review: Chase Bliss Habit Echo Collector – is this the most creatively glitchy delay pedal ever?

For the unfamiliar, Exp is an expression pedal with a roller mechanism instead of the up-down rocker more commonly employed in such devices. In this new iteration, Chase Bliss also put the inverting switches on the outside to let you more easily change expression direction.
“Two independent outputs, with the ability to invert the direction of one (or both) for contrasting movement among your pedals,” wrote the brand in an announcement for the Exp on Instagram.

The Exp is available right now, directly through Chase Bliss, for $199 apiece.
Earlier this year, Chase Bliss announced it was embracing a direct-to-consumer model, shifting the sale pedals from physical stores to its web store. The reason for the change was to prevent the price hikes, explained Joel Korte, Owner of Chase Bliss.
“If there was one single thing that pushed me to this decision, it’s this: I couldn’t see any other way to go forward without raising our prices,” Korte said at the time. “Our pedals are already expensive, and I also don’t want to compromise on the quality to save money.”
Generation Loss MkII, the latest effects pedal from Chase Bliss, has been making the rounds after being first announced in June 2022. A significantly upgraded version of the original Cooper FX pedal (now in stereo), the pedal is described as “a study of tape in all its forms.”
“We decided to start from scratch this time and really explore what tape is all about. Get into those crinkles that make it so magical. We took apart VCRs, we analysed anything we could find with a tape in it, from camcorders to cassette decks,” wrote the brand in a description post.
The post Chase Bliss brings back the Exp expression roller pedal appeared first on Guitar.com | All Things Guitar.