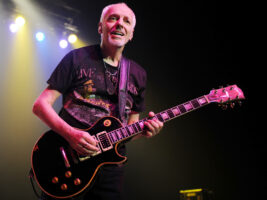 Peter Frampton’s next record will be entirely self-written: “I’m going where no Frampton has gone before”

Peter Frampton’s upcoming studio album is in the works, and it’s one jam packed with songs written entirely by the master himself.

READ MORE: Peter Frampton to perform his final shows seated: “I have progressed in my disease”

Speaking to Uncut magazine about his latest musical endeavours, Frampton said, “I’m recording brand-new material right now. No co-writers, all my own songs, and I’m throwing out a lot already because every track’s got to be a winner.”
“I’m going where no Frampton has gone before.”
This marks the first time in over 45 years that Frampton is releasing an album with no co-writes. The last time the guitar legend had issued an album full of self-penned tracks was Frampton in 1975 — which featured some of his greatest hits like Show Me The Way and Baby, I Love Your Way.
The musician also described the upcoming album as the type of record that should have followed the 1976 sensation that was Frampton Comes Alive!
“I enjoy co-writing and have done it for ages with various different people, and I always enjoy it,” Frampton told Ultimate Classic Rock. “But I think when I wrote on my own, it’s much more unique and … uniquely me. I might do things in writing a song that other people would say, ‘Oh, no, you don’t want to do that. We shouldn’t go there,’ but on my own, I can be like, ‘Uh-uh, I’m going there.’”
As for the album’s release date, Frampton admits that it’s something even he himself has no clue about: “I don’t know when I’m gonna finish it,” he said. “There’s no rush. I’m taking my time. I want every track to be something that gives me goose-bumps and I go, ‘I’m proud of that.’ There’s not gonna be any filler on it.”
“It’s gonna be the best that I can do, and I’m very excited about it. I’ve got some great material. But this one might take a little longer.”
Frampton’s ‘Finale – The Farewell Tour’ continues next month; the artist recently announced that he will be playing seated during the shows as a result of his Inclusion-Body Myositis disease.
The post Peter Frampton’s next record will be entirely self-written: “I’m going where no Frampton has gone before” appeared first on Guitar.com | All Things Guitar.