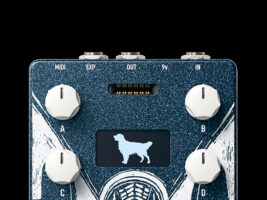 The one-person pedal operation Cooper FX has announced that it will no longer be making effects as founder Tom Majeski leaves the business to pursue new endeavours.

The effects maker is best-known for experimental pedals, such as the Arcades multi-effects with swappable Gameboy-style chips and the Generation Loss VHS Tape Simulator, a collaboration with Chase Bliss Audio.
Majeski announced the wrap-up of the company’s operations in a statement on Instagram today (21 October), hinting that the guitar community hasn’t heard the last from him.
“Today marks the last day of Cooper FX,” he wrote. “After something like 7 years (jeez that’s a long time), Cooper FX will no longer be making any more pedals. I’ll be leaving to pursue a new endeavour that I’m very excited about.”
“This certainly won’t be the last time you hear from me though. So thank you to everyone who’s helped make my dream by turning my silly hobby into a really nice job. It may seem like Cooper FX was a one-man show but I couldn’t have done this without the help of about a million other people.”
In his statement, Majeski also promised that he will continue to offer support and service to Cooper FX pedal-owning customers.

It’s unclear whether Majeski’s new endeavour will be one in the music gear industry.
The post Cooper FX announces it will “no longer be making pedals” after some seven years in operation appeared first on Guitar.com | All Things Guitar.