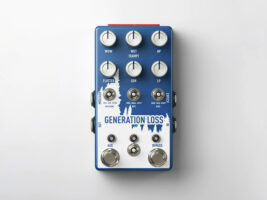 Chase Bliss Audio has announced that Tom Majeski, formerly of Cooper FX, has joined its team.

READ MORE: Cooper FX announces it will “no longer be making pedals” after some seven years in operation

Last month, Cooper FX’s Instagram was updated with the news that Majeski would be shutting down Cooper FX after seven years. “Today marks the last day of Cooper FX,” he wrote. “After something like seven years (jeez that’s a long time), Cooper FX will no longer be making any more pedals. I’ll be leaving to pursue a new endeavour that I’m very excited about.”
That new endeavour was detailed on Chase Bliss’ Instagram, where founder Joel Korte welcomed Majeski (as well as Cooper FX’s namesake, Cooper the dog) in a short video. “It’s gonna be awesome, we’re never going to have any problems” Korte stated. “Two guys working on pedals. And Charlie too. And everybody else. There’s a lot of people. A lot of men and women. And dogs.”
In the description of the post, Korte posted a quick FAQ to answer some of the bigger questions about the move. With regards to a reissued Generation Loss pedal (Chase Bliss and Cooper FX’s collaborative and celebrated VHS simulator, Korte wrote: “we want to leave that what it was. Buts, we are definitely working on a new version with many new features and we are hopeful that will make the best Generation Loss pedal yet. You’ll have to be patient though, the release on that is probably six to eight months away.”
“Knobs is helping us on it too.”
With regards to other existing Cooper FX designs, Korte wrote: “No, we are gonna leave those alone too. We do have plans to integrate some existing Tom technology into new devices… if it’s not already obvious, we are very excited about some of these ideas and also some stuff Tom has been working on for years that has not been revealed fully. The future is bright and weird sounding”
See the video and the post below.