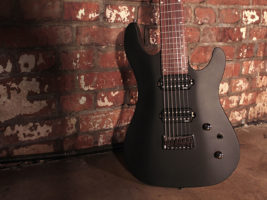 An axe for metalheads.
Cort has added the KX257B to its KX series of electric guitars. This baritone seven-string axe is designed with a longer scale length and high-output EMG pups, making it the perfect tool for players chasing a modern metal sound.
The KX257B has a mahogany body and a 27-inch scale length. The former contributes to its commanding midrange tone, while the latter encourages a tighter low-end response. The guitar has a jatoba fingerboard with raindrop inlays, and is finished in a sleek Matte Black.
Where electronics are concerned, the KX257B is loaded with a set of EMG RetroActive Super77-7st pickups. These are capable of delivering high outputs that are voiced for articulation and sweet high-ends. Control-wise, the pups are wired to a volume knob, a tone knob and three-way pickup switch.
Elsewhere, this seven-stringed beast boasts a string-through-body hardtail bridge that provides plenty of sustain and resonance.
Lists at $599.99. More information at cortguitars.com.The post Cort unveils the KX257B Baritone seven string appeared first on The Guitar Magazine.